For getting off the beaten path, my source for each state is the Road & Recreation Atlas from Benchmark Maps -- this time the Oregon Edition. That was where I found the "Covered Bridges of Marion County." As I drove the back roads, I found five.

The oldest of the bridges was built in 1916. Incorrectly, I assumed that covered were old and built before I was born. The bridge built in 1966 disproved that assumption. Sorry, but the brushy undergrowth along the river kept me from getting one of those scenic shots of the bridges. 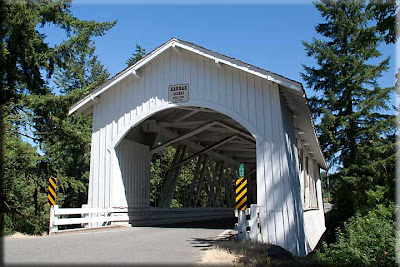 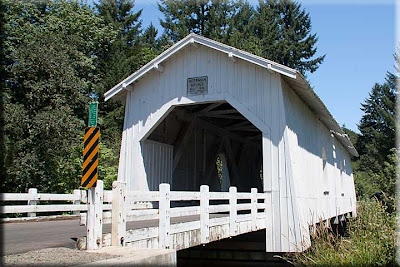 When I was snapping photos at one of the bridges, a bike rider came through and stopped to rest and snack. A day off from his pipe fitter job, he was celebrating his 40th birthday with a bike ride to at least equal that in miles.

To find all those bridges,  Bike rider Brad told me I could get a map in the nearby village of Scio. Too late for that. At that point I was satisfied with the ones I had found. Besides a map would have taken all the fun out of the wrong turns I made.
Posted by Unknown at 8:00 AM