Some days are better than others. That also goes for the throughput on the Verizon air card. When I arrived at the Elks Lodge in Port Townsend, there was good signal with three bars showing. Sometimes it was four bars. My internet searches were speedy and downloads were what was expected of broad band.

On Saturday morning of the Fourth of July weekend, throughput was gone with one bar and sometimes none. Occasionally, the air card accessed the internet via National Access. It was the dark ages. Considering the slower than usual broadband throughput, I concluded that Verizon must have gone to their backup power source -- wind. 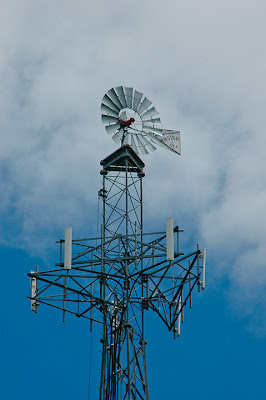 Now that the holiday weekend is past, the throughput is back to what it was last Friday. It does make one wonder.

Considering this was a three day weekend, my suspicions were that Verizon sold lots of band width for the weekend to some large corporation to move billions of bytes of data from one data center to another. That along with a couple of Lear jets would have been used to move data from one data center to another. Considering the spate of recent bank failures, could that be a possibility.

Or is it a conspiracy theory.

Postscript on Tuesday morning: As stated above, throughput was great. This morning not so good. Bad in fact. Back to wind power.
Posted by Unknown at 11:35 AM