Following that 1944 photo featured in yesterday's blog entry, this farm kid spent time in grade school, high school, University of Wisconsin (Madison), and off to San Francisco in the mid sixties. When the San Francisco area was too crowded for this farm kid (and farm kid former wife Eileen), we headed to Denver. That is where TJ and Vanita are sitting on my lap for my 33rd birthday. 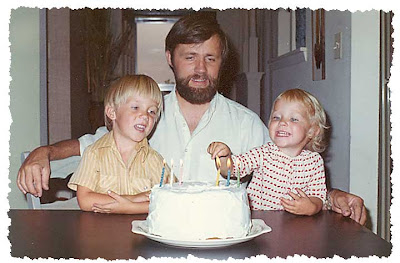 The candles on the cake were symbolic of 33: three on the left and three on the right. (Hmm. Does that say something about my politics.) Those were the days when I still had hair and color in the hair. And of course the beard was de rigueur at that time.

In yesterday's post I had commented about not doing 70 miles on a bicycle to celebrate the upcoming historic event. Boonie wondered if 70 kilometers might be an alternative. Maureen suggested 70 minutes. Now we're getting closer to reality.

At one time there was a bicycle hanging on the trailer. Fortunately, the bicycle found a good home in Durango Colorado last summer. Walking is my style. So with that in mind, I will go for a walk -- someplace. How long. It doesn't matter. Just getting out and walking is the reward.

A story to share when the beard was cut off five years later.... After the beard was cut and with a clean shaven face, the startled expressions and the stares I received from TJ and Vanita will never be forgotten. Returning to work that next Monday morning was most informative about what people see or don't. The comments that I recall: "I recognize the voice, but not the face." "Looks like you traded in the glasses for contacts." "You look ten years younger."

That last comment was also the one I most frequently heard from Wisconsin relatives.
Posted by Unknown at 11:28 AM