Not those animals. But the fraternal organizations by the name.

A privilege of Elks membership is to park at the RV spaces that are provided at some of the Elks Lodges across the country. I've used them many times in my travels and frequently when in Denver or San Diego.

When I arrived at the Shelton WA Elks Lodge, the signs at the entrance indicated that this was the location for both the Elks and Moose Lodges. A first and -- indeed -- a surprise. 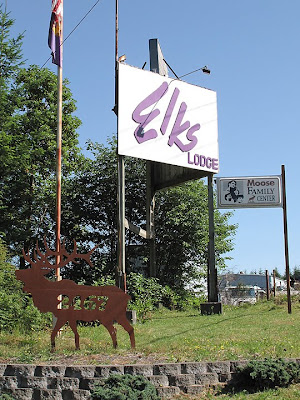 Checking the rules and regulations board, the campground is for the use of Elks members. Two of the spaces appear to be occupied "permanently". One other transient besides myself in the 20 spaces.

The two level building has a walk-out downstairs. The main level upstairs is the Elks. The downstairs is the Moose and the entry is at the rear of the building.

The situation is symptomatic of Elks and Moose Lodges across the country. Memberships are declining. How to keep the Lodges going. The average member age of most Lodges is over 65. This site appears to have been the Elks first. At some point it appears the local Moose needed new space and the Elks leased the lower level to the Moose.

No activity at either bar for my first two nights here. Perhaps there will be some activity at the bar of one of these lodges this weekend for me to get the full story. Without a Moose membership, I may never get the story.
Posted by Unknown at 10:37 AM