Driving up the driveway at Rich and Cyndi's house, I could hear my voice say say, "Oh no". It was a surprise birthday party. Friends and co-workers were gathered in front of the garage holding a large sign wishing me a Happy Birthday (for my 60th - ten years ago). They had pulled it off. They were surprised that I didn't pick up on all the slips that had happened during the previous week. I had missed them all. That should make my employer wonder about my marketing skills -- if I couldn't pick up subtle signals.

Putting 60 candles on a cake sounded like a good idea. However, getting all those candles lit was an effort that took several people lighting simultaneously. Just in case, the fire extinguisher was handy. The result was a mini forest fire that creating its own firestorm. Note that large flame in the center. The photo was taken and with a effort and lots of wind -- not just my own -- the fire was out and we dined on chocolate cake. 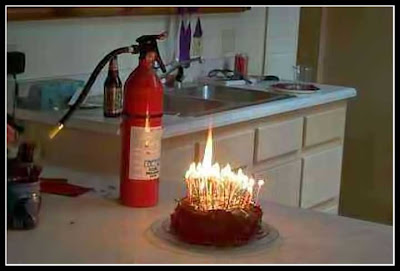 In retrospect, there was agreement that each candle symbolizing 10 years would have been sufficient. But survival of risk provides a rush and that alone is reward to consider doing it again next time.

All the invitees were generous with cards and gifts. The gifts were bottles of Crown Royal. The supply was enough to last a long time.

Once again, thanks to all who attended to make it a memorable day that I will never forget.
Posted by Unknown at 10:24 AM