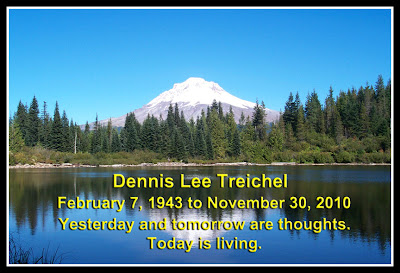 My brother Dennis died at the young age of 67. Born on February 7, 1943, Dennis was diagnosed with early onset Alzheimer's less than two years ago. Rapidly progressing and destroying brain function, the disease claimed his life this morning -- November 30, 2010.

Dennis and I were born three years apart and born after our older sister, Lois. Dennis and I left our Wisconsin farm home at the same time in 1962. That was when I headed to Madison to complete my university education. Dennis joined the Air Force.

Individually, Dennis and I pursued our separate lives far from our folks and relatives in Wisconsin. After Dennis retired from the Air Force after 23 years, he and his family resided in California and eventually in Oregon. Most of my working years were in Colorado. With our geographic separation, we rarely saw each other.

Meeting Dennis and his wife Karen for a recent August breakfast in Salem, Oregon, it was a shock to realize that Dennis did not recognize me. The Alzheimer's had already claimed much of his brain and function to the point that he had essentially regressed to a child like state.

Karen, daughters Stacie and Candi, friends and local hospice were Dennis' support for his last days allowing him to stay at home where he died.

There are lots of one line quotes about living each and every day to the fullest. It is the personal experience of a younger brother dying that makes the advice all the more real.

Yesterday and tomorrow are only thoughts. Today is living.
Posted by Unknown at 10:23 AM