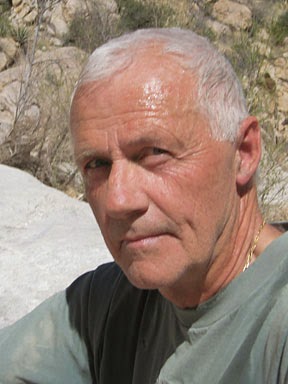 A long time ago I was raised on a farm about 18 miles south of Green Bay, Wisconsin near the little village of Morrison. In fact, my ancestors settled there after coming from Germany in the middle of the 1800s. (Head to the genealogy section to learn more.)

From the small village of Morrison, I continued school until I graduated from the University of Wisconsin, married and headed to California.  After a few years of California living, Denver was the destination when California became to crowded for these farm kids.

After graduation from college, my entire working career was in computers from programming to technical sales.

I married Eileen Kriewaldt after graduation from the University of Wisconsin. We had two children: TJ and Vanita.  Eileen and I divorced.

To achieve balance in my life and attempt to meet my life philosophy, I retired in 2000 so that I could indulge my passion for hiking, travel and learning.  With a truck towing a fifth wheel trailer, I toured North America until January of 2014.

I needed a change from the travel. It was time to find a settled existence. In early 2013 I started the search for the ideal urban settings in the southwest and the Colorado Front Range. With nine months of good weather, Tucson was selected as an optimum location. In January 2014, I purchased a single wide mobile home at Far Horizons RV park. That doubled the living space of the 200 square foot trailer which was sold along with the truck.

Travel and exploring will continue. It will be different. At this time, thoughts of my future are merely dreams and possibilities.


My web site that has been around for over ten years: Wandrin.US