My Silver City host suggested a visit to nearby Ft. Bayard. As most every other fort across the western US, this one was established (1866) to protect the local settlers of Silver City. Here the enemy was the tribes of Apache Indians.

When the fort was slated for abandonment in 1899, it's life was extended as it became a sanitarium for Army personnel suffering from tuberculosis.

When drugs were found to address tuberculosis, the fort and its buildings went into a steady decline. Lack of maintenance and vandals have been taking a toll on the buildings dating from 100 years ago. 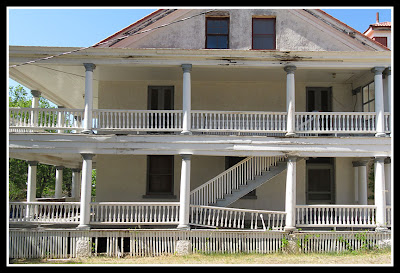 At one time, it was a busy community of families. How about some low budget teeter totters. I remember something similar from my childhood. Wondering. Do they even exist today. Not these. A child might get hurt. 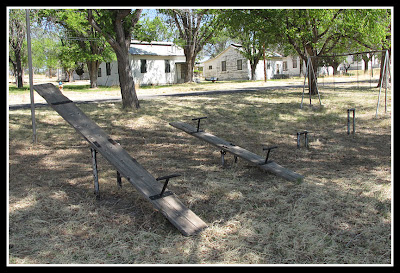 At one time, the Fort's officers and their families would have sat on these wrap around porches looking over the parade ground immediately across the street. Or perhaps they sat there in the cool of the evening. 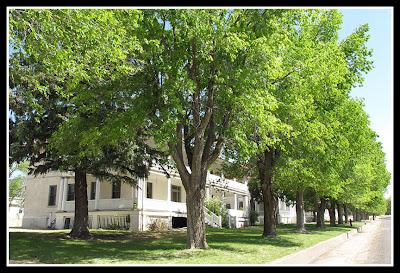 Some of the medical and patient buildings were in use until just two years ago. They were replaced by newly constructed facilities nearby.

The fort was named a New Mexico Historic District and a National Historic Landmark. Does that help them from collapsing. Probably not; Nature is a persistent recycler.

These are empty shells of buildings and no current usage. They have already become a magnet for vandals. Do they have a future. Can the buildings rise from their current state of collapse and be put to a use in the 21st century.