After over a month of blue skies and not a hint of rain as I crossed Arizona and New Mexico, I found clouds and rain in southeast Colorado.

Way over my self imposed limit of 150 miles travel a day I arrived at Lamar Colorado after 230 miles from Amarillo Texas. Once across the Colorado state line I noticed the clouds building in the west. Dark ominous clouds. It was definitely time to stop when I arrived at the Elks Lodge in Lamar. Pulled in and parked. Hooked up to the electricity and took a photo. 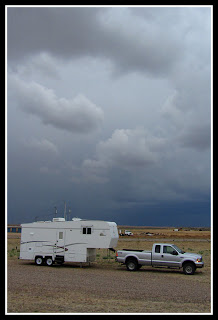 Didn't know it at the time I took the photo, but within those dark thundering clouds there was a tornado lurking which had touched down about five miles east of Lamar.

After taking the photo, it was time to head into Lamar with Silver Slug for some fuel and exploring of the town. Perhaps there was a photo op. Silver Slug wouldn't start to allow me the mobility to get into town -- three miles distant. Oh no! Another of those potholes in the road of life. Small one this time.

By the end of the afternoon, Silver Slug had been towed to the local Ford dealer. With no rental car to be had, I was consigned to spend my stay at the Elks Lodge in Wandrin Wagon.

Rain and wind continued far past midnight. As Wandrin Wagon was severely rocked, I was feeling a little queasy. It was then I recalled that trailers and their trailer trash residents are magnets for tornadoes. Now I was concerned for my safety. Probably wouldn't survive a direct hit. What if Wandrin Wagon was toppled by the wind. Could I get out of here. Too much worrying and not a lot I could do about it anyway.

This morning it was cloudy overcast with more showers possible. Blue was peaking through the cloudy skies in early afternoon when I received the call that Silver Slug's starting problems were resolved. Once I paid bail I was reunited with Silver Slug. Then I filled with $3.95 a gallon diesel and explored Lamar.

Hitching up tomorrow morning, I will head west to Pueblo Colorado along US Hwy 50.