Boonie proved to be the good host upon my arrival at Silver City. The first venture was to explore the Gila Cliff Dwellings. Boonie was familiar with the road from the seat of his bicycle -- for the first 15 miles. It was all new terrain to me -- as were the last 30 to Boonie. The ruins are located in a canyon with a year round spring fed stream. 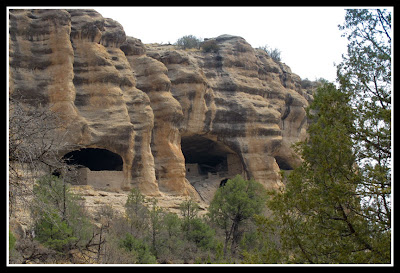 My nomadic journeys have taken me to many of the Anasazi ruins around the greater Four Corners area. This is one of the more remote and very short lived. According to the ranger at the site, it was occupied for less than a generation from about 1275-1300. The structures were built far enough into the cave to prevent water seepage and rainfall from undermining the "clay mortars" of the structural walls. The walls are original with very little work done for stabilization. 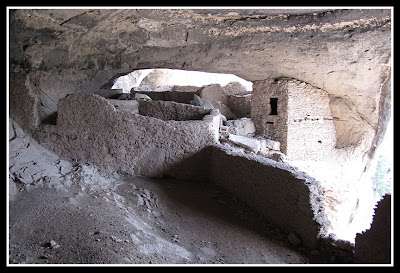 Our conclusion was that the residents were much more agile than we were to crawl in and out of the rooms and crannies under the rocks. And much younger. I could not imagine getting up in the middle of the night to "use the facilities".

Thanks for the tour, Boonie. Where next.