Don't have to come to the park to see the palo verde. They are in bloom all around Tucson. The mass of yellow blossoms on the tree is followed by a yellow snowstorm of flower petals on the ground. 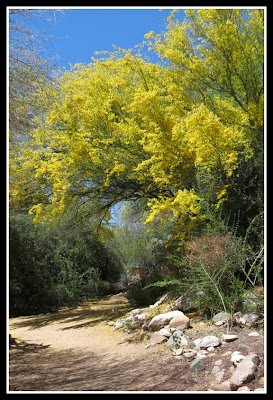 Trees, annuals, and perennials in the park were blooming. Cactus were also in bloom. Not really sure what this cactus is. Much of the plant and the blossom looks like the senita cactus. However, they are a white flower. Most likely it is some kind of cactus hybrid to produce the colors of the yellow, red and pink. 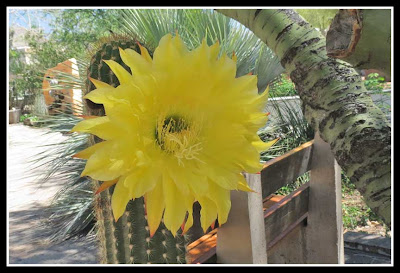 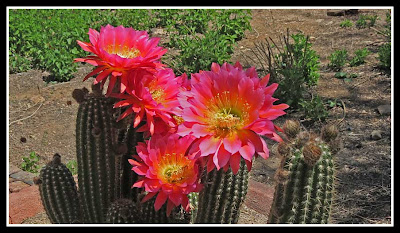 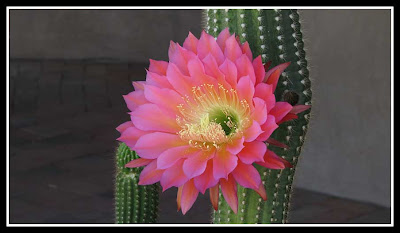 The desert is home to several varieties of yucca. Here is a close up of the blossoms. 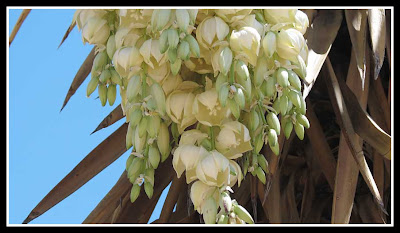 A desert garden is not complete without a saguaro. There were very few of the saguaro with buds and I didn't see any blossoms. 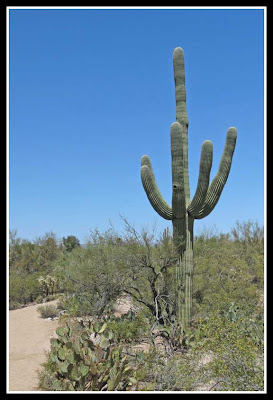 In my hikes around the Tucson area, I see lots of prickly pear along the hiking trails. However, in this protected environment of the park with a little water, this prickly pear has grown rather large. I couldn't back up far enough to get a photo of the whole plant. It grows horizontally rather than up. Kind of like an adult human. :-) 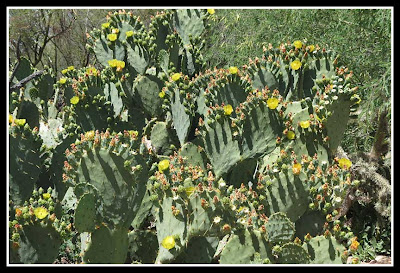 A close up of prickly pear blossoms with a new pad. Probably would be a bad idea to harvest that pad for a nopalitos side dish with an omelet. 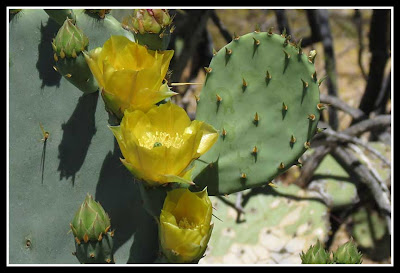 The only wild life I noted in the park was this lizard. Perhaps a desert spiny lizard. Each time he stopped he would do push ups. 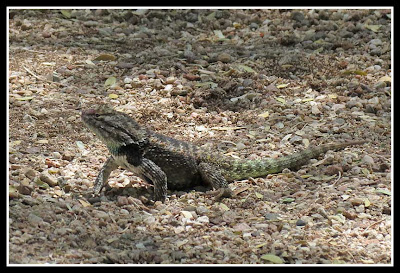 One reason to come to the park was to see what the night blooming cereus looked like. Blooms in June and at night is the way to see the bloom. I knew I wasn't going to see a bloom, but I had to see the dead looking stick that held this bloom. 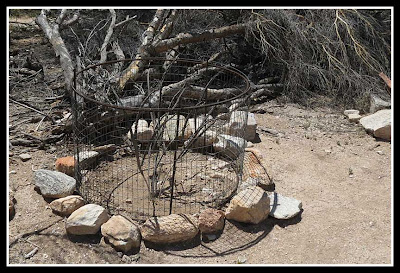 All of the plants are in "cages". Noted several of them along the Desert Trail. Looking closely at many of them, I noted only one with a very small bud. The rest were -- well -- dead sticks.

Most of the plants will bloom on a single night. How do those plants communicate with each other the night of their bloom. According to a docent, there are some who didn't get the message about that night. Some will bloom early and others later. However, it is June when they bloom and I will be in Colorado.

It was a warm day wandering around the park with temps in the high 80s. It was a great day for a walk to see the desert in color.

Note: Put your name on a Tohono Chul email list, and a blanket email will be sent out when the night blooming cereus blooms will appear.
Posted by Unknown at 4:33 PM