Seems early, but my nomadic travels to winter quarters south of I-10 begins tomorrow. Recently I noted that the August mornings are a little cooler. Time to begin the migration.

Tomorrow morning, I leave Boyd Lake State Park behind. There are few campers remaining mid week. Last night was the first time I was able to leave the windows open without being overcome with smoke from camp fires. It was great. 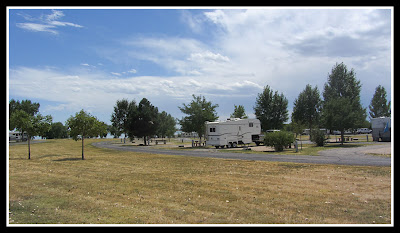 The planned travel route is Poudre Canyon west from Fort Collins and continuing west and south to Ridgeway State Park (near Ouray) -- with numerous stops along the way for exploring. First day of travel will be short when I stop at a National Forest Campground in Poudre Canyon. Guessing it might be 60 miles from here. I'll be away from the frantic rushing of the Front Range cities and an afternoon nap would be a great prescription for the accumulated stress level.

Since this route had not been taken before, the planning, campground option research, anticipated winding canyon roads and slogging mountain passes are causing stress. After all these years of travel into the unfamiliar, it would seem that a new and unknown route would not bother me. But it does. I won't sleep well as a result. Intellectually, I can tell myself not to fret. Easy for me to say. Regardless, it's the unknown that produces the stress.

Trying to stay balanced is tough.

When I arrived at Boyd Lake SP (Loveland area) two weeks ago, the Verizon data access was at 3G speeds after I had come from the 4G speeds of Denver. Last night was the switch over to 4G in Loveland. Now I have to go through withdrawal once again.