With Apple's anticipated announcement of a mini iPad today, my iPad is really old technology and capability. 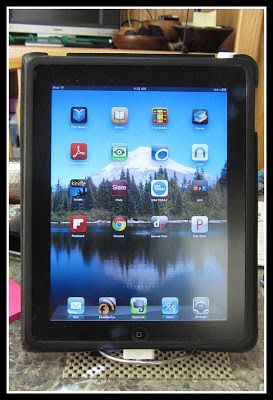 On April 3, 2010, I picked up my iPad the first day they were available for purchase. Only two and a half years later it is bordering on antique status.

Compared to the later iPad models, my iPad has no camera, slower processor speed, heavier, less screen definition. Resale value had already plummeted with each announcement. Yes. It became an antique. Or at least a collectible.

When the latest (new) iPad was introduced, and with the Apple iPhone 5, the operating system has also been upgraded. Current version is iOS 6.0. That new op sys cannot be installed on my iPad. No doubt much of the op sys function has changed for the latest hardware incorporated in these later products.

Since that latest op sys and as the apps upgrade for the later model iPads, many of the apps on my iPad frequently crash. They may also crash on the newer iPads. However, my belief is that it is my older iPad running on iOS 5.1 on the older hardware which is the contributing factor to the app crashes that I experience. One site with frequent crashes is Apple's App Store. For other sites, a factor seems to be video content embedded in many internet articles. Don't view videos, but their existence causes the crash. Didn't take long to avoid the apps and web sites where the crashes occur.

My iPad does a great job to meet my wants. It is the only eReader that I have. (Donated the Kindle and the Nook to libraries.) In addition to reading books, the internet provides the news, a "reference librarian", playing games, doing crosswords, etc.

No I am not going to get a mini iPad. My iPad may be obsolete and considered an antique, but it is mine and it still works great for my wants.