An Option To Full Time RVing

Over the past seven decades, there have been several of those "time for a change" crisis points. It was eleven years ago when a crisis point was satisfied with a leap into RVing full time in a fifth wheel. Those eleven years have gone fast. It's been a great ride -- figuratively and literally. Watching the scenery along the back roads is a pleasure that never gets tiresome.

Even better are those times as I pass through the agricultural areas of the country and noted the changes in farming over the past fifty years. Lots of things have changed including air conditioning. There was none in my youth unless you went to a movie. On the road it was 4-60 air conditioning. (All four windows rolled down and going 60 miles an hour.)

Now with another crisis point looking for a change, what is the next phase of life after the full time RV living. It's an ongoing discussion within my brain. This is only the latest in a long list of crisis moments to satisfy a wandering instinct. First walking. Then a bicycle. Then a horse. At sixteen it was a car. Then it was the first new car I owned -- a 1961 Plymouth convertible. 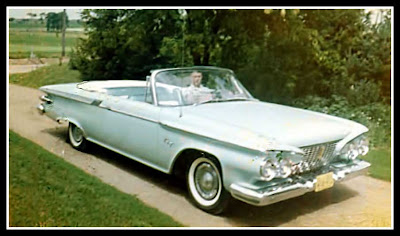 More wandering followed. After university, it was California. Then it was Colorado. Change is good. Been searching for another change this past summer.

It was at one of those Ford dealerships where I spent lots of time -- and money -- this last summer where I saw this Mustang. Soon there was another option on the alternatives list of life after RVing full time. 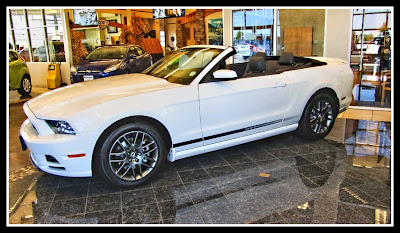 My convertible would not have a black interior. Anything but black. Probably would not be a convertible either, but the sticker price was not a whole lot more than I would get for the truck and trailer upon a sale. That made the option more attractive. With a smaller car, I wouldn't have to park on the far side of the parking lot where the Silver Slug is usually parked. That might be a bad thing. I would not get the exercise this old body needs.

Soon, I was imagining the new world of a small apartment in Prescott Arizona within walking distance to the downtown square and the coffee/tea shops. When I do need transportation it would be the convertible. That little car could get me to the trail heads so I could continue my passion for hiking. For cross country exploring, a cooler in the car's trunk and motel camping would be the new life. The new world was looking attractive.

However, I've been fooled before about what would make me happy. Could I really be happy with motel camping after rving full time. Probably not. Regardless, a place in Prescott and a car is an alternative for the next phase of life.