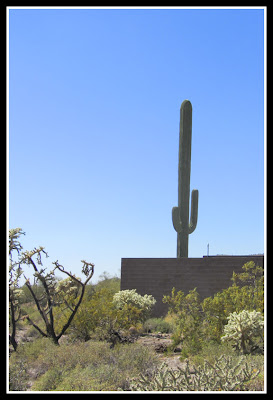 Doesn't look so unusual. Parked in the dry camping area at the Usery Mtn Park entrance waiting for a space to open, this saguaro is enclosed in a concrete wall adjacent to the parking lot. That saguaro doesn't look that unusual until a closer inspection reveals that it is too perfect. With binoculars it becomes real obvious that it has no thorns and the Gila woodpecker hole is really just paint.

Headed over to the entry station to ask. It is a Verizon cell tower.

When I first arrived here, I could get a 4G signal for a few minutes and then it went to 3G. Sometimes it became so confused that the air card had to be restarted. The Wilson truckers antenna is stored right next to the air card. Plugged in the truckers antenna. Made no difference. This was before I realized that phony saguaro was a cell tower.

Took the truckers antenna outside and mounted it atop a mast. Now it was outside and extended about three feet above the top of Wandrin Wagon. Access was 4G consistently. After this experiment is when I found that phony saguaro.

Sometimes things are not what they appear to be -- including a saguaro.