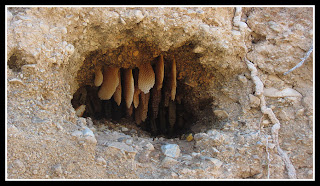 Not so on this recent hike. My plan was to get some photos of the bees coming and going. Well. Those guys were not in a mood to be photoed. No sooner was I focused, when the hive sent out a kamikaze bee who headed straight for me. Saw him coming. He stung me right above the eye. I slapped at my forehead and moved down the wash. Way down the wash. The other hikers never moved and were ignored.

Still wanted a photo of the active bees. Headed back and stood among the other hikers. No sooner was I standing there, and another bee headed straight for me. The message was clear. Wandrin Lloyd had to go. Other hikers could stay. C'mon. What did I do.

Headed down the wash away from the hive and looked for arrow heads, pot shards or any unusual rock. That was when I spotted a thunderegg. Only about an inch across. Was it really a thunderegg. Well. It was. It wasn't hollow, but the smash of the almost sphere displayed an interior of crystals of some sort. Sorry no photo. But thanks to the bees, it was a great find.

Now that the bee sting has had two days to mature, those wrinkles above the left eye aren't as noticeable. Cheaper than botox.