The Fishhook Barrel Cactus has bright yellow fruit. My first taste check was several years ago. On the recent Tucson hikes, there were opportunities to share the taste with fellow hikers. Most were reluctant, but a few overcame their fear of something that wasn't found at the grocer. To me the taste was like kiwi-apple. However, I have noted variations from one to another. In the most recent tasting, it was more apple taste. That was the consensus of those who took the taste test. 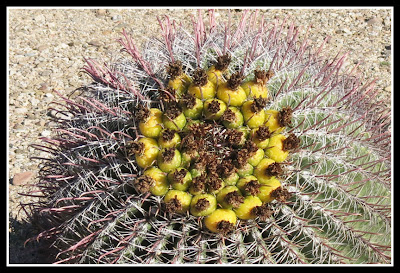 On another hike, I decided that I would check out the fruit of the Jumping Cholla. Some -- incorrectly -- call it the Chain Fruit Cholla. Nothing fruity about it. Being curious what it might taste like, I looked carefully at some of the "fruit" dangling at the end. Making sure (without my reading glasses) there were no spines, I pulled off the end fruit. There were no large spines, but some invisible spines did manage to embed in my finger tips. That was enough to keep me from a taste. Couldn't see the spines in the finger tips, but they were there. Once at home, an emery board was used to abrade the skin of finger tips where those spines could be felt. That resolved that problem. 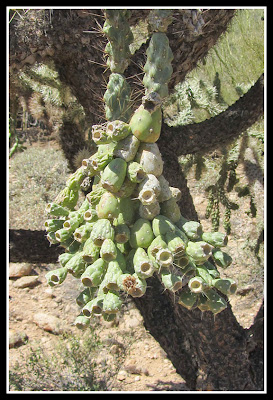 Hiking a trail in Usery Mtn Park, I found several older gentlemen (older than me by perhaps a decade) closely examining a Jumping Cholla. One of those gentleman said they were edible. I said, "Not". At that point one of the guys pulled off a very small end fruit, handled it and offered to his buddies. All refused and then offered to me. After a brief examination, I took a very small bite. Looked and tasted like gelatinous green. After relating my taste impressions, they hiked away. I headed in the opposite direction, and realized that bite was not going to get any smaller. Spitting it out, I realized there were some spines in my lip. No emery in my pocket and a long time before I was home, I ran my tongue back and forth over the lip as I continued my hike. Not sure why that worked, but eventually the spines were no longer felt.

Did those guys put something over on this youngster. Did they know. For me it was learning experience. Curiosity can be hazardous.