From the North Ranch SKP park, Wickenburg is down the road a few miles. Wickenburg is the home to the Desert Caballeros Western Museum. Pretty hard for me to pass up a museum about the west. However, I had visited the museum in my previous visit to Wickenburg. 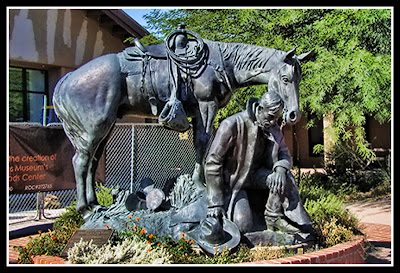 So I continued my walk along the mostly western themed downtown. 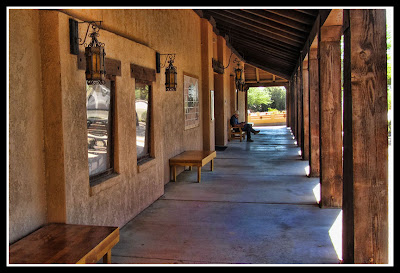 Walking by Ben's Saddle Shop, the distinctive aroma of leather was in the air. Couldn't resist the fragrance of that smell. Had to get a closer whiff.

Soon I was in a conversation with Hawaiian shirt attired owner. Seems a bit out of place in a saddlery store. No. He doesn't wear Hawaiian when a horse. 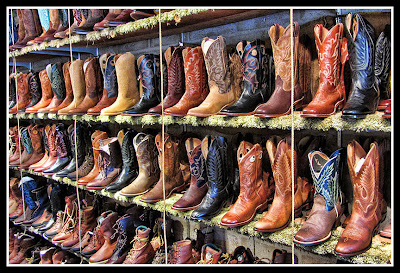 Boots, hats, saddles, riding gear are among other items in the small store. Saddles were plain to ornately tooled leather.

Yeah. He could make saddles, and decorate them. However, there is better return on his time making repairs for shoes, boots, saddles and other leather goods.

Checked the internet and found that hay was being exported from the U.S. to many other countries in addition to Saudi Arabia. Southeast Asia is the largest importer of hay from the US. Much of it is shipped from southern California.

Asking if saddles were imported. Yup. It's all about cheap. They are imported by the container load from China and India. Do they fit the horse. Maybe. Hope I never find myself in a saddle with the imprint "Made In China". For me, it just hurts the mythical image of the American western cowboy.

American made saddles are expensive by comparison. In addition to the high price of beef, there are few leather tanning operations left in the US. My interviewee said there was only one U.S. operation that tanned leather for saddles. Today with chemicals hazardous to the enviroment and humans, US regs make it a difficult business. Other countries with fewer environmental and worker safety regs now tan and prepare leather for usage in leather products. Of course the product is also created before import to the US.

Nothing like the aromatic odor of leather to invite me in for the learning experience about exporting hay and importing saddles.