Sure looked like a "man thing" when wandering the car show in Lake Havasu City last weekend. There were hundreds of cars on the rough of the golf course where the event was held. Polishing and dusting the cars was a fulltime job for these owners on the dusty course. With tent gazebos set up and a cooler of liquid refreshment (that would be beer), the owners and their wives were watching the wanderers such as my self. Don't touch. Just admire.

Just as the owners were much older (my age plus or minus a decade), the wanderers were of a similar age bracket. The wanderers were 95% male with an occasion female wanderer. Did she really care about the cars -- or was the couple still in the dating stage. Did this cynic just write that.

No doubt there are ladies that restore cars, but it wasn't obvious from my exploring. When I did read the name of the owner, it was a man's name or a couple. Never did see one with just a lady's name. Autos and engines appears to be another of those traditional compartmentizing of males and females. Could this change in the 21st century.

There were cars of all vintages from the 1920s to the muscle cars of the 1960s -- including restored stock cars, art pieces, restored trucks, a Metropolitan, a 1965 RV on a Dodge chassis, some low rider art pieces, etc. The hoods were open on those where the engine wasn't stock or was chromed or painted some day glow color. Some times there were several males of the species standing around the engine getting the details about the engine from the owner.

Restorers of cars appear to be another of those subcultures of the USA population -- like the RVing subculture. In my strolling, I overheard conversations that were sharing information with others about the car restoring process, where to get the parts -- and one conversation was about his current 1956 project and he didn't know whether it was going to be stock or not.

Want a restored car. Many were for sale. Want to create your own. Rusting hulks were also for sale. 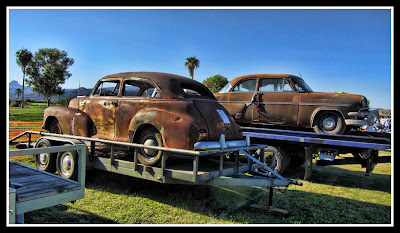 With lots of time and lots of money, soon you can have a restored car -- or an art piece. Blue is a good color. All chrome parts were stripped and everthing is blue on what appears to have been a late 1940s coupe. A low rider without a door handle. 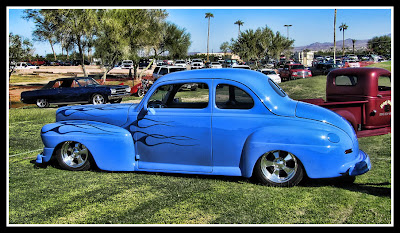 
It was a long walk a couple of times around to make sure I didn't miss anything. Fortunately, I had "sole protection" for my feet. Note these goat heads on the soles of my sandals. 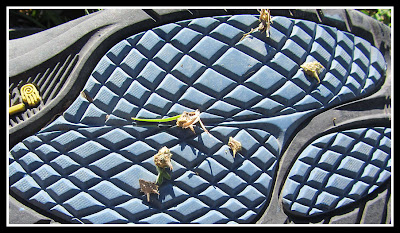