That "super committee" made up of Federal legislators is doomed to fail. Everyone knows that they will not be able to agree -- let alone make some possible suggestions. Previous non partisan recommendations have failed. 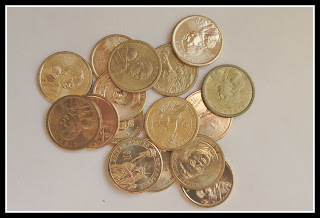 No doubt there are big expenditures to be addressed. However, there are some small expenses that could be addressed. One of the suggestions by the committee was to stop the printing of dollar bills and use dollar coins. The life of a dollar bill is about 40 months. The coins will outlive the legislators.

Guess what. Follow the money. When the commitee made the recommendation for dollar coins instead of paper, immediately a Senate bill was introduced by Senators Kerry and Brown of Massachusetts to block the abandonment of paper dollars. Turns out that the cotton paper supply for paper money is provided by a Massachusetts company.

In a previous Speaking Of Budget post I had recommended getting the penny out of circulation to eliminate some needless spending. That won't happen either because the zinc miners appear to have a strong lobby.

If the legislators are serious about reducing government expenses, these are just two very minor items where some savings could be had. It's not going to happen. Not even one of the two.


My lonely promotion to get the penny out of circulation seems to be going no where.

Thanks to a recommendation from friend Phil of Tucson, there now are dollar coins in my pocket at all times instead of pennies. The dollar coins are great tip money. The bad part is finding banks who have rolls of dollar coins. When I happen across a bank with rolls, I buy several to keep me going until I run low once again.
Posted by Unknown at 12:10 PM