Build it and they will come.

Lake Havasu was created when the Parker Dam was built in the late 1930s. That brought the fishermen to the lake that was created. That created a fishing camp at the current location of Lake Havasu City. In 1964 it was incorporated.

The centerpiece and the tourist draw is the London Bridge built in 1971. The bridge was dismantled and moved across the Atlantic Ocean rock by rock from London and now spans a channel in Lake Havasu. Not that I have ever been to London, but I doubt this desert terrain in any way resembles London. More likely, fog would have been a usual feature.

People have been coming and building a life (or vacation home) at Lake Havasu City for the past 40 years. Recreation is the draw. On the water with jet skis and high powered jet boats. On the nearby desert hills can be found the four wheelers and the ATVs. Lots of those. 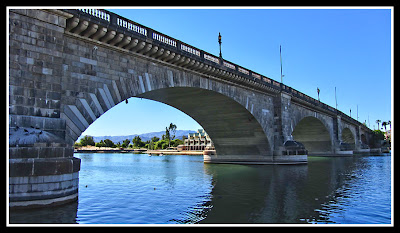 With large open expanses of water, warnings are required to mark the land forms that may prove hazardous to boats. Time to build a lighthouse. This one third size replica of the Split Rock lighthouse at Two Harbors Minnesota was built by the Lake Havasu Lighthouse Club. 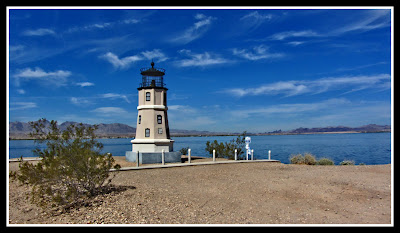 The warm days and clear skies have been a daily occurrence with the exception of one day. Time to capture the sunset. Not a great sunset. So with Topaz plugins and Photoshop, this is an artist's (that would be me) representation of the end of the day on the east shore of Lake Havasu. 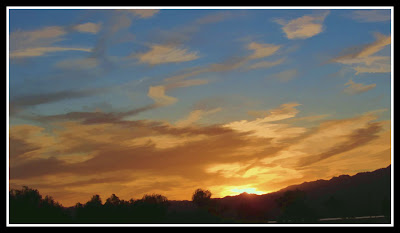 From the curmudgeon... When did Halloween turn into a major holiday. Halloween cards. Candy by the bushel. Pumpkins by the ton. Ready made costumes. Deserted retail space becomes a Halloween shopping bonanza for one month. Then there was the pumpkin carving kit. Huh.