When recently looking at my archive of photos, I was scanning photos from my 1998 trip to Australia. The photos jogged my memory as I recalled the experiences: camping; hiking; kayaking; urban exploring; rain forest; Great Barrier Reef snorkeling and more.

One bus tour was of Kangaroo Island. Bus tours are for the older generation. At the age of 58, I wasn't the youngest on the bus of about 20 people. There was one couple younger than me -- other than the tour bus driver. The tour included a visit to what is called the Sahara of Australia. With constant winds, the sand dunes are in motion.

As we arrived at the parking lot, the tour bus driver explained the geology of the area and the formation of the dunes. The bus was parked and we had the chance to join the driver on a walk to the top of the dunes. Looking at the group standing there, I decided that it might be the young couple, the bus driver and me that would be headed up. How wrong I was.

Standing next to an older gentleman, he wondered if I was going. Sure. Let's go. We chatted a bit as we walked in the loose sand. Soon we were walking up the slope of the highest dune talking less. Two steps up and one back is the way it was going. I slanted to the side avoiding the steepest part of the dune and the gentleman followed me. Soon we were standing side by side at the dune summit taking in the view. 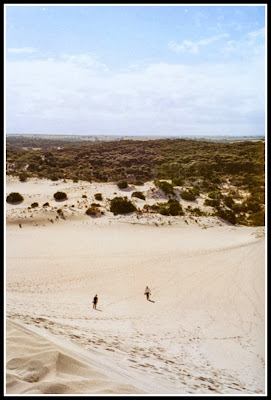 As we stood there I realized from comments he made that he was about the age of my father. I wondered if he didn't mind sharing his age. No problem. He was 82. I looked at him and told him that he was an inspiration to me.

And that conversation and scene remains an inspiration to me. I hope to be walking and climbing sand dunes when I'm 82.