Parked at the Elks in Yucca Valley, nearby Joshua Tree was a place for exploring and hiking.

The distinctive shaped Joshua tree is not a tree at all, but a really large member of the yucca family. 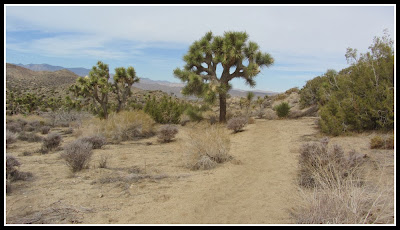 Another draw to the park are the rocks. There were rock climbers on the rocks. Some were just scrambling. Others were in teams using ropes to scale the more difficult climbs. 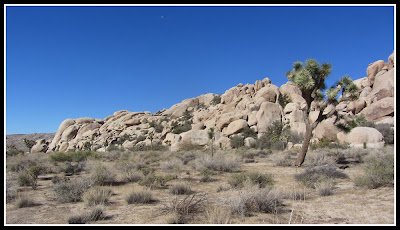 When I parked at one of parking spaces for climbing rocks, I met a couple from Oregon. My age. It was a good time of the year to climb rocks in Southern California. They said they mostly scrambled, but they did have ropes and equipment just in case. 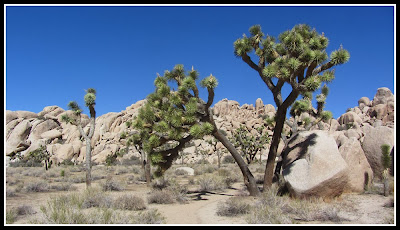 I was walking in one of the more popular parking places when the tour bus drove up. As they exited the bus, I noted it wasn't English that was spoken. Their timing was excellent. Two weeks earlier, the Federal government shut down would have denied the tour bus entrance to the park.

With a ten minute photo stop, they would have been unable to see this tarantula that I spotted when I was hiking a desert trail. My foot gives an idea of the size. 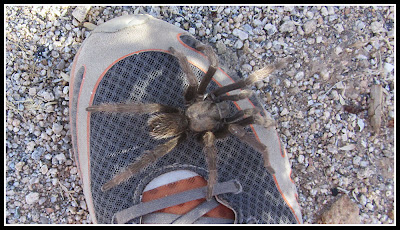 One of the must stops along Park Boulevard, is Skull Rock. No tour buses when I arrived. Nor were there any other people. I was alone to scramble some rocks and take photos. 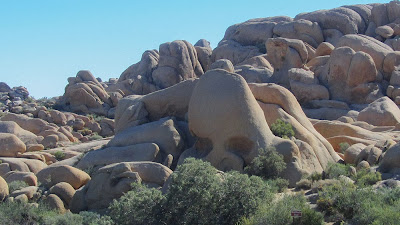 Hungry time arrived. Time to eat my gorp that I brought as a snack. No sooner had I sat down, and this beggar appeared. When he realized (can birds do that) that I wasn't going to feed him, he left. 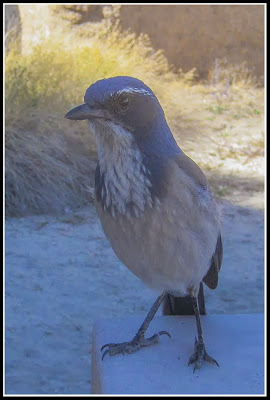 Hiking on trails that are shared with horses, stirs the sand on the trail to a fine grit. These shoes don't keep out the sand. I poured out a couple of tablespoons of sand. 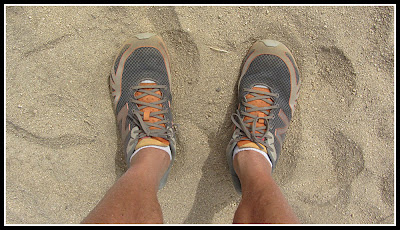 You ask why the minimal shoe for hiking. That works best for me. The less material there is between me and the earth, the easier it is for me to walk/hike.

At the end of the hike, it feels so good to empty the sand filled shoes.