After several months of little hiking, yesterday was a short hike. Today it was just under six miles round trip on the Colorado Trail from the Durango terminus. That should make me sleep quite well tonight.

As a weekend hike, I wasn't the only one on the trail. However, most don't go much further then the rock outcrops on the river where the kids and dogs splash. That is about a mile hike on the trail.

The bridge across Junction Creek was my turnaround point. A short distance before that point, the trail had been modified by nature. This was a recent event. It may have happened just a couple of days ago when the area was pelted with a couple inches of hail and lots of rain.

Several other hikers and bikers had preceded me across the avalanche of rocks, trees and dirt. The creation of a new trail left lots of texture to the trail. For this guy with balance problems, it wasn't an easy crossing. 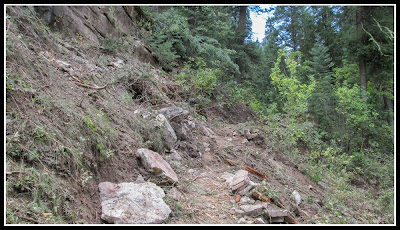 About fifty feet below me on the river/s edge were several rocks and one very large rock that probably started the avalanche. The rock had the evidence of concussions with other rock on its tumble down the slope. 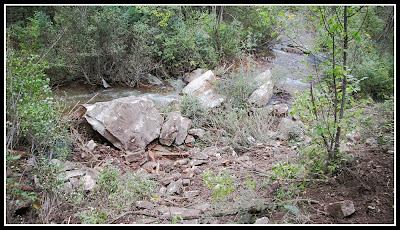 Looking uphill through the still standing trees, I spotted a location about 100 feet up slope where the rock was before the fall.

It was a great hike including seeing nature's remodeling of the landscape.