Break In The Rain

The boon docking was too crowded on the Arkansas River at Salida, so it was time to move on. Stopped at South Fork (8200 foot elevation) and settled down in an RV park. Headed to Creede for the first exploring day. It was a cloudy day and soon it was raining and continued to rain far into the evening. Expecting rain yesterday, I embarked on a project to eliminate some of the ballast in Wandrin Wagon. Ballast being things that have not seen the light of day in a couple of years.

Today started out clear so I headed to Creede once again. Colorado Hwy 149 to Creede follows the banks of the Rio Grande River. Yes. That river. The Rio Grande headwaters are in Colorado near Lake City and the river flows through Colorado and New Mexico and down to the border with Mexico. There it provides the border between Mexico and Texas and eventually the Rio Grande ends in the gulf. 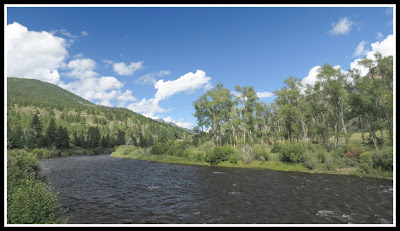 Wonder if anyone has done a canoe trip from the Rio Grande headwaters all the way to the gulf. Or at least to the Mexican border at El Paso. Along the way there are some dams that would require a portage.

The 20 miles along Hwy 149 follows the river. Over a million years, the river has carved its way through the mountains leaving slopes of trees and meadows. At one time this was Ute summer hunting grounds. Utes were replaced by miners searching for precious minerals. With the miners came the cattle ranches. Today a few cattle ranches remain and coexist with the numerous summer (and permanent) homes that line the banks of the Rio Grande along the 20 miles between South Fork and Creede. 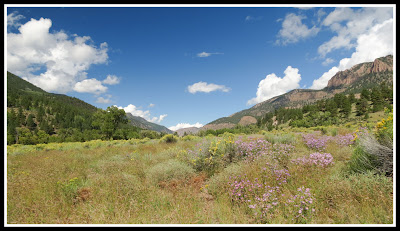 Almost into the middle of September, I had hoped to see more color in the aspens on the slopes. A search for a closer look found no way to get there. So this telephoto shot of the color will have to suffice. 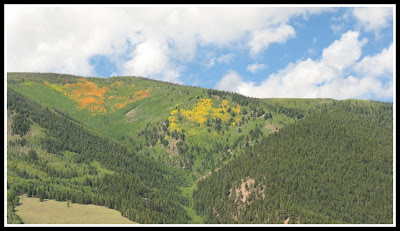 After several photo ops along the way, I arrived at Creede. Walked up and down the main drag with the usual galleries and gift shops appealing to the tourist. With the nearby Rio Grande, I noted three fishing outfitters. There were numerous places to eat and a couple of coffee shops. Add to that a hardware store and a grocery store. That was the main drag.

From downtown I drove up into the canyon of mines that provided jobs and wealth for the Creede community. At the mouth of the canyon, a mine had been turned into a mining museum and community center. Still wondering what was holding up all that rock over the community center room. It was not a small room. Suppose I could have asked, but sometimes I like mystery.

Silver Slug wasn't designed for this kind of road. Narrow and steep (~20 degrees). A shorter wheelbase and overall vehicle length -- like a 4X4 Jeep -- would have been a much better choice for the journey. Eventually I found a turnaround, did a five or six point turn and returned the way I came. 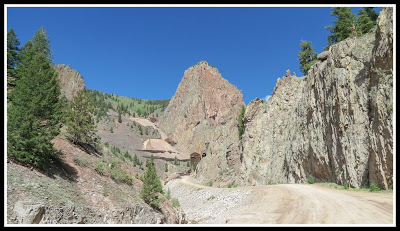 By mid afternoon, I was back home and it was raining again. Approaching nine this evening, and it still rains off and on.

Perhaps a Jeep and no rain would have made it a more pleasant day, but I have no complaints. When I got up this morning, I looked in the mirror and saw me looking back. Yup. It was a great day.