Always Have a Plan B

Considering the off and on rain conditions, I didn't know if I was going to get out of South Fork. Ever. I don't travel in the rain. Some vague planning was done on my next camping stop. Really vague. And no Plan B.

Two days ago in South Fork, the morning was cloudy once again. No rain. With SlowG internet speeds, rainy/cloudy days and the rent was due, it was time to move on. After a one week stay of clouds and frequent rains, I had done very little exploring and no hiking.

I hitched up under cloudy skies. Hoped it would stay that way. Starting at 8200 feet at South Fork and heading west on CO Hwy 160, it is a gentle climb to Wolf Creek Pass. Driving along that section of Hwy 160, the hillsides were mostly dead trees with an occasional green tree. Looks like it is only a matter of when a forest fire will occur. If no fire, the dead trees will collapse to become recycled nutrient for the healthy trees taking their place.

The pattern of dead trees continued to the Wolf Creek summit. The road was damp with a few rain drops falling from the light clouds drifting around this almost 11,000 foot pass.

Cresting the pass, the roads were more damp. Wet roads do impact traction. With no reason for hurrying, I maintained a steady 40-45 MPH going down hill with a down shift and the truck exhaust brake. That was when I was passed by some guy pulling a trailer going over 50. Hoped he didn't have to make an emergency stop on these wet roads or to avoid going over the edge on the tight turns.

That southwest downhill side of Wolf Creek Pass was scenically beautiful as the road followed the San Juan River drainage. The dead trees were on the other side of the pass. Seems this side of the pass had a different kind of pine. No dead trees.

Losing more elevation, the drainage widened to ranches and grassland pastured by black and red cattle. Sure looked like grass fed beef. 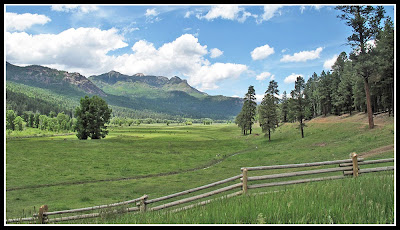 My camping destination was a Forest Service CG west of Pagosa Springs. Unfortunately, I didn't think about grocery shopping as I passed through Pagosa. I was out of edibles -- particularly the vegetables and greens that make my salads. When I arrived at the CG, I discovered it was well shaded. Solar was not going to work. Without a generator, I was going to go to Plan B.

There was no Plan B for a backup camping spot. With that planning omission, it was back on the road wasting lots of fuel. Finally stopped at a private park and parked less than 100 feet from the highway. Sometimes, I don't think clearly. Sounds like a symptom of attention deficit disorder.

Once Wandrin Wagon was parked, I headed to Pagosa Springs for grocery shopping. Then it was back to the RV park to listen to the traffic on Hwy 160. I would prefer the occasional train whistles to the continued road noise from trucks and fast moving vehicles.

This morning's commute traffic awakened me. The day could only get better.  I had my morning shake and was on the road by 8:30 and at Navajo State Park by ten. Parked and setup by eleven. Pleasantly quiet here and only two other camping spaces occupied in this loop. 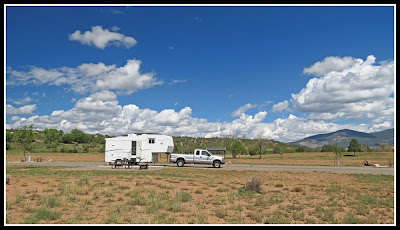 Yesterday's bad day wasn't a total loss; I learned a lesson (again) about making a Plan B for alternate camping options.