While visiting Linda and Bill, Linda invited me to join her at an authors' night at The Book Haven bookstore in Salida. Isabel Suppe was the last of the four authors to speak.


Isabel Suppe's book, Starry Night, is based on the story of a real life experience involving a 1,100ft fall while ice-climbing in the Bolivian Andes where she had to spend two days and nights dragging herself over the ice in order to be rescued -- and to return to climbing on special crutches.

Isabel's book tour is done mostly on bike. However, some of the travel is done courtesy of others. The store owner Lisa introduced each of the authors. During her introduction of Isabel, Lisa said that Isabel was looking for a ride the next morning to Buena Vista.

Since I was going to Leadville the next morning, I could do that service. After giving others at the event time to offer their driving services I waited until people started to leave. I went up to Isabel to ask if she already had a ride. Nope.

Next morning I picked up Isabel, her bike and her "luggage". On the 30 minute drive to Buena Vista, I learned much more about Isabel. Speaks five or six languages. Driven. Adventurous. Still does technical climbing of very tall mountains. 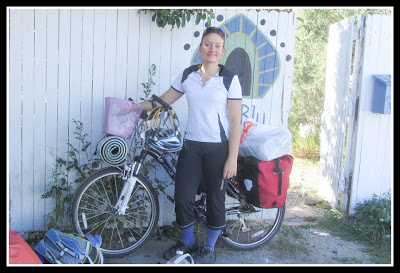 Everyone has a story. Isabel's story is one of inspiration. My potholes in the road of life are a mere inconvenience by comparison.

Adventure is a great portion of Isabel. How else to explain a book tour on bicycle.