Wonder what the car designers were thinking at the of 1950s when the fins started to appear from the rear auto fenders. The sprouted variations were endless. Horizontal. Vertical. Reverse. Scalloped. Sharp. Appears the designers didn't have focus groups. With a top down organization, the head designer made the design and the rest of the staff did the execution regardless what they may have thought about the design. The staff had no input.

Those were my thoughts as I was looking at the 1959 Cadillac at the Forney Transportation Museum in Denver. The changing exhibit (ends August 31) at the museum is Cadillacs from 1959 to 1969. 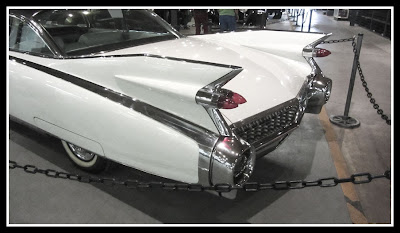 The 1959 Cadillac with the torpedo tail lights was the beginning of the series at the museum. Following the Cadillac models over the next ten years, the fins were absorbed slowly into the fenders of the cars and by 1969 the fin was no more than a ridge on the fender. 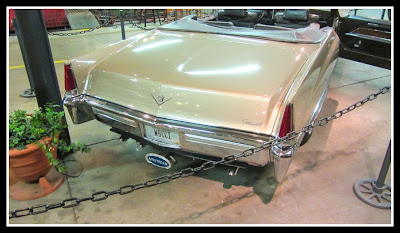 My one ton truck is twenty feet long. The Silver Slug is not easy to park in parking lots designed for compacts. My usual parking place is in the "no scratch zone" requiring a long walk across the parking lot or I park several blocks from my destination where I found a place to park the behemoth. It's good exercise for this old body.

I paced off the length of the Cadillac to find it was twenty feet long. Just like my truck. No doubt also as hard to find a parking place. Looking inside the Cadillac models, that auto could easily seat a family of six to eight very comfortably. In fact, there appeared to be enough room in the back seat for a rancher to haul a thousand pound beef to market. I then checked out the open trunk. The size of the trunk could easily accommodate three bodies with room to spare. Smuggling friends into the drive in theater would have been no problem.

It was great memories as I toured the ten year review of Cadillacs. It was a good day.


Prior to 1970, auto manufacturers retooled the entire auto body to present a new look every year. Those were the days when cars were uniquely identifiable for year and model. Today most cars look alike -- streamlined squat bubbles. The exceptions to the stream lined models are the "cube" styled autos that hope to grow up to be Hummers.

In the just wondering department... At a recent Silver Slug maintenance at the Ford dealer, I roamed the new car lot and noted the fuel fill location on the Ford cars. Why are some on the left; others on the right.