"A good traveler has no fixed plans, and is not intent on arriving." ~ Lao Tzu

Before hitching up at Cottonwood, I made tentative plans for travel on the way to Moab. My preference is to travel 100-150 miles between stops. That plan worked the first day when I stopped at The Cameron Trading Post in Cameron, AZ. That was about 100 miles.

The plan for the next day was about another 125 miles distant where I would dry camp at Monument Valley. Always a good place to stop with great rock scenery. Arriving at the entry gate to pay the $5 entry fee, I was informed that I would not be allowed to camp in the park. Not even dry camping as I had always done in the past. Bunch of motorcycles right behind me waiting to pay their entry fee. Time to move along without questions.


Pulled into the parking lot at the Tribal Park and headed out with the camera to take some photos of Monument Valley scenery.

It was a gang of people taking photos. People watching is fun. A bus of Japanese tourists were pointing their cameras at the scenery or taking photos of each other in the scenery. Those tourists are to the left rear of the photo. 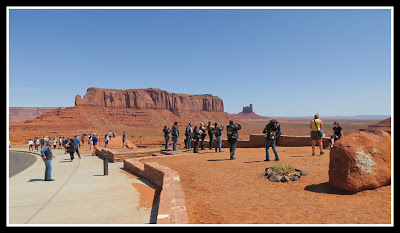 Closer to the camera and to the center right are the group of Harley Davidson motorcycles riders. They were a club from Marseille France. There were about twenty cycles. Some had two riders. Many only had one. Didn't see anyone posing for the cameras held by the Harley riders.

No doubt my readers already know what scenic view was being captured, but just in case there may be some question. Here is the scenery known as the mittens. 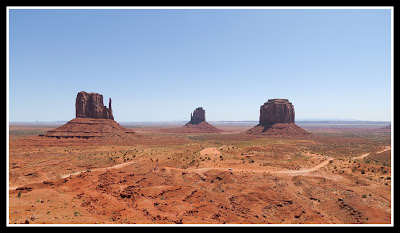 After a few more photos of the scenery and rock formations, I went inside to the information desk. How come there was no camping. A full hook up RV park was going to be developed on the site. They would be starting the construction in about two months and it would be mid 2014 before completion. Have to wonder why they didn't continue to collect camping fees until the construction crews were on site. I didn't ask that question. These guys were the messengers. Da rules is da rules.

Headed outside for a few more photos and found this guy who was oblivious of the scenery and tourists. 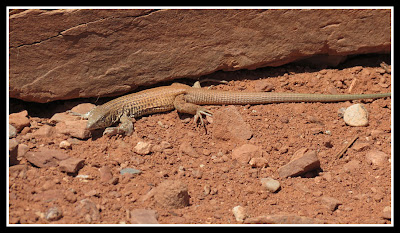 Then it was time to make some decisions about travel and where to park at the end of the day. Since I had traveled and explored the southeastern part of Utah before, I knew where the parking options were. The first thought was Sand Island near Bluff. 45 miles later I was passing through the Sand Island campground and found a single space open. Not an attractive location, I decided that it was only another 30 miles to Blanding to an RV park.

Plans are one thing. Execution is another. Flexibility is good.