To get to Dinosaur National Monument at Vernal Utah from Fruita Colorado requires a climb of close to 5000 feet up and over Douglas Pass. Climbing the sometimes grade of eight per cent, it was a long slow climb. With gravity in charge on the down hill side, it was a matter of exhaust brakes and low gear to get back to range land.

That journey was the Friday of Memorial day weekend and choices for RV parking were limited. Ended up in downtown Vernal at an RV park. It was while parking and setting up that I discovered that Silver Slug's reverse wasn't working too well. Planned to deal with that later.

Off to Dinosaur National Monument on Saturday. Holiday weekend meant the place was crawling with the "I love dinosaurs" kids. 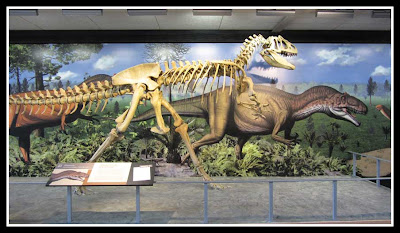 What they loved were the dinosaur toys -- not the bones of the dinosaur. The history education of dinosaurs wasn't going over real well with the kiddie set. Not so sure about the parents or the grand parents. They may have suppressed their thought as they looked at the quarry wall of dinosaur bones. 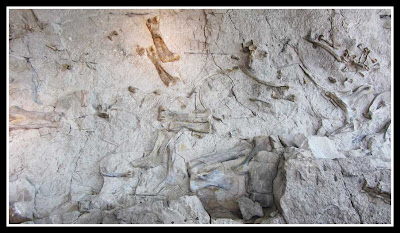 While on that day of exploration, I assured myself that I did have a transmission problem. Reverse gear is where the issue was noticed. Easy enough to address. Always park so no reverse is required. Nice fantasy, but I decided on a more practical solution. I would get the transmission replaced.

Replacing transmissions is nothing new to me. The first was about 140,000. Number two made it about 50,000. The current transmission was almost 50,000. Checked my records for that last transmission install. Turns out it was three years and one week ago; one week past the three year warranty.

First thing on Tuesday after the holiday weekend, I headed to the Ford dealership in Vernal. The earliest they could get me in was the following week. Next stop was at Craig's Pitt Stop in Vernal. Mike (one of the co-owners) said they were booked for the next week. Explained the problem to Mike about RV towing and the history of transmissions. He suggested I upgrade to a larger transmission cooler when I replaced the transmission. How come that large cooler was never mentioned before.

Rather than hanging around Vernal for two weeks, I asked Mike about heading to Rock Springs to have the work done there. No guarantees, but he felt I could make the trip; take it easy and use a pull out when available. 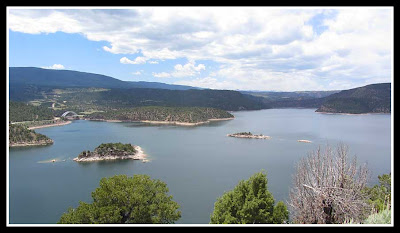 Pull outs would have been great, but with moderate grades and across the Flaming Gorge dam, I arrived in Rock Springs intact -- but stressed.

Lots of things are beyond my control. A transmission failure is one. That will cause a 10 to 14 day layover in Rock Springs. After parked at an RV campground, my first visit was the Ford dealership to make all the arrangements for the transmission and a transmission cooler upgrade. Bring in Silver Slug next Tuesday.

Time to "make lemonade out of lemons" for this layover. Internet searches and soon I found the exploring that can be done in the area. What I've found so far is a lot of driving. Probably can handle that. Just need to remember that reverse gear doesn't work too well.