For me, watching nature wield power is a spectator sport. That's the only reason for this post.

According to my thermometer, the high today at my house was 95 degrees. Mid afternoon the clouds started rolling in. About six, the clouds were getting darker. There was rain and hail in those green-gray clouds. An occasional lightening bolt managed to scare me and my neighbor campers. 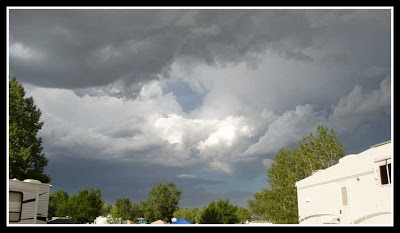 Probably wasn't too wise for me to head out for photos with the occasional lightening strike. Figured I was safe under the nearby power lines. Probably a poor assumption. The power pole would be struck and the lightening bolt would head down to the ground and short out the electrical circuits in this body.

That didn't happen, so I managed to get a few more photos of the leading edge of the clouds. 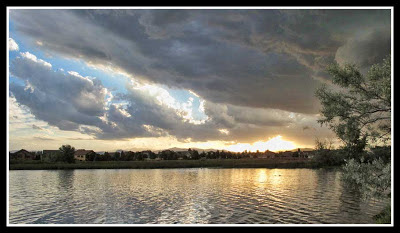 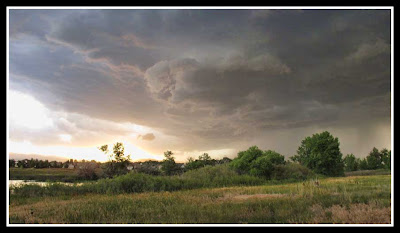 With the ominous color of the clouds and the increasing winds, it was time to get back to my home. Inside I noted the temperature was at 80 degrees.  The wind started to build. Soon neighbor campers were taking down their awnings. Then they were putting away the "portable shades" that were over the picnic tables.

Soon the rain started and it rained hard with some hail included in the mix. Sure does get noisy in this box -- I call home -- as the rain fell by the bucket full. Looking out my windows, visibility was less than a hundred yards.

By nine o'clock the rain had dissipated and the outside temperature had dropped 15 degrees to a comfortable 64.

The rain spoiled some campers planned campfire on this Friday evening of the beginning holiday week. It happens.