These guys were testing gravity at the Prescott Skate Park. Note the shadow in relation to the rider. 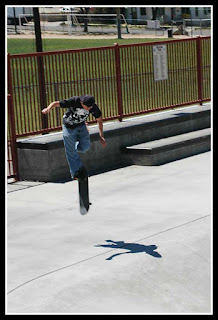 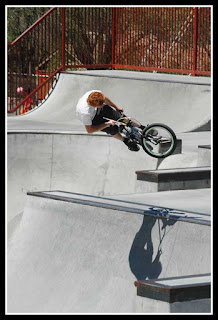 There were four or five kids on bicycles or skate boards. None of them ever crashed as I was watching. Since none were wearing any protection from a hard landing, it appears they didn't expect to crash. With a fast shutter speed, I was able to catch several at their mid air zenith.

Back on the farm as a kid, tests of gravity were a more modest venture. Climb up into the hay in the barn and then slide down the face of the stack. Some could handle it better than me. After a couple of exciting slides, I would have an asthma attack. On the verge of suffocation, I learned fast not to do that again.

As kids we made excitement with what was available on the farm. Climbing trees was one way to defy gravity. The barn hill provided a sloped terrain for winter sledding. Riding a vintage bicycle, I managed to stay upright on the rural gravel roads and avoided drawing any blood.

When I was 14, Dad relented and gave into the begging to get a horse. Rode a lot and checked speed and stopping capabilities of the horse. My horse riding experience is related in Shattered Myth. Gravity got me that time.