Fishing On The Wolf RIver

A nostalgic recollection.... Daughter Vanita, nephew Marc and son TJ on their Grandpa K's dock. Marc is fishing while the other two seem to be consulting. At least TJ seems to be doing some talking. 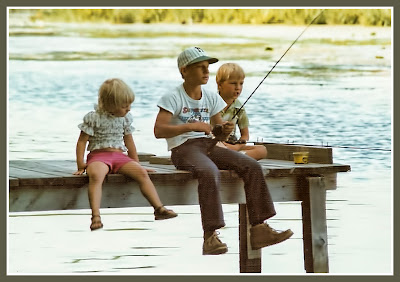 Grandpa K retired from the farm to a home on the Wolf River (Shawano Wisconsin). With not enough time to go fishing while farming, Grandpa K was making up for lost time during his retirement. It was also a great place for grand kids. Grandpa K was more than willing to give a few fishing lessons to the grand kids.

On this same summer visit to Grandpa and Grandma, Vanita tried her hand at fishing. Sitting on the dock waiting for a fish to come by to find the bait required more patience than Vanita could spare. Perhaps she was doing some physics experiment testing drag as she moved the line from left to right in the water. Starting slowly she started to move it faster left to right. Grandpa K consulted that Vanita would not catch a fish that way.

That was when she pulled a fish out of the water with the hook firmly snagged on the fish's back. Vanita looked at Grandpa K. Needless to say, Grandpa K was struck at how wrong he was about fishing. He said that was the last time he would give fishing lessons. Don't know if this is the same fish, but this is Vanita showing a catch. 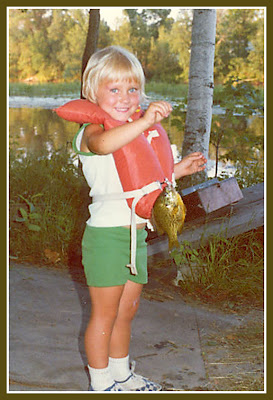 Vanita -- and Gabe -- now fish for tuna in the waters off the shores of San Diego.

Today, 35 years later, Grandpa K's retirement home on the Wolf River is now the retirement home for Marc's father -- Emil. Much of Emil's summer is spent on the river fishing -- and catching. When my nomadic travels take me to Wisconsin, a visit to Emil is part of the journey. The visit will include a treat to the latest catch or some that were previously frozen. Never get away empty handed, I end up with a "care package" including some maple syrup that he harvested the previous spring.