The article reminded me of my 2004 journeys to Canada's Maritime provinces -- at Prince Edward Island. I arrived at a fishing camp marina to take photos. Taking photos, a boat arrived with a very visible large fish. Turns out it was a blue fin tuna. 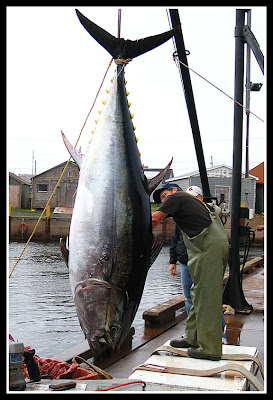 The boat was moored. Lots of activity. Crane hoisted the tuna from the boat and soon the butchering began. Then the carcass was dropped into a large crate of ice. More ice was placed all around the carcass including the body cavity. Just as quick as the activity started, it ended as rapidly as the box was readied for shipment.

That is when a few of us were curious where the tuna was going. The fish buyer happened to be near by and the conversation I overheard said that this tuna did not have the fat content that he likes to see. That probably explained the disgruntled look of the ship's captain for the price he was quoted. Asked where will this tuna go, the buyer said that it will be air freighted to a fish market in Japan. One well traveled tuna.

Before I began this mobile life style in 2001, I lived in Denver just a few blocks from the Sushi Den. Ate sashimi there far too often. After dining on sashimi around the country in my travels, nothing compares to the Sushi Den. The fish there is always fresh.

Some of the fish at the Sushi Den are shipped from Japan. A brother of the owner continues to live in Japan and buys fish at the markets to air freight to Sushi Den in Denver.

As I stood at that marina on Prince Edward Island, I could see the tuna going from PEI to Japan, to Denver and the Sushi Den. No wonder sashimi is expensive with all the add-on transportation costs.