Herbie Around The World

Around the world in a 1963 VW bug towing a 1984 East Germany made travel trailer. That works for the young and intrepid couple -- Domi and Zainab. Leaving Austria in 2009, this map of their travel is posted prominently on the rear window of the VW bug. 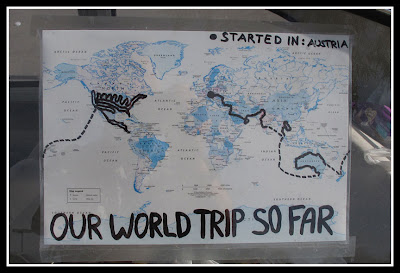 When I left a nearby Starbucks, I noted the European license plates and the interesting and novel combination of VW bug and trailer. Time to get the full story. Thanks to Domi and Zainab for being so open in responding to my questions. Living very inexpensively, they have been able to travel the US for most of a year without paying camping fees but for one night -- at a National Forest Campground. Note those zig zag lines on the map as they have explored the US. There is no doubt they have seen more of the US than I have.

Domi is obviously a talented mechanic since he was repairing a clutch issue as I arrived. Domi didn't stop his work as I interviewed Zainab. They saved for several years. Forsaking the usual track for most people their age to acquire the "must haves" of culture, they pursued their interest in traveling the world. 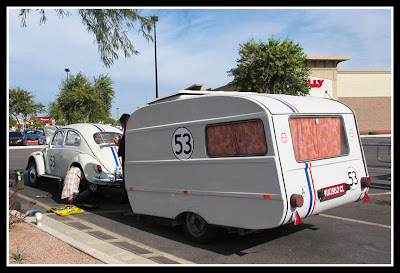 The VW bug is affectionately referred to as Herbie from the movies (1968 version followed by a 2005 reprise) that featured a 1963 VW bug competing in car races -- and adorned with the number 53. Herbie is not some wimp with an air cooled engine towing the 750 pound trailer. Domi said that the heat of the deserts of the Middle East were a test to prove the air cooled engine could handle most anything.

Guessing that Zainab and Domi were in their late 20s, I was curious about their parents' reaction. Although concerned for their children's welfare, they encouraged them to live their lives. Bravo. 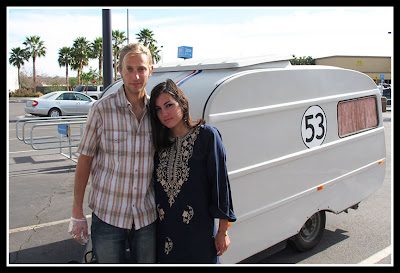 With no blog, Facebook or other such internet contact point, the only way to keep up with this dynamic duo is to cross their path as they travel.


To you Domi and Zainab.... Wishing you safe travels as you continue your journeys.

The Yuma Sun did more in depth piece on the couple and their travels
Posted by Unknown at 8:10 PM