The nearby Goat Track has been an every other day hike for several weeks. From the trail head there are lots of alternative trails and loops. From canyons to high peaks to palm oasis, there is much to explore.

The first half mile from the trail head is a steep climb requiring an occasional stop to catch a couple gulps of oxygen. Okay. So it was more than occasional. It was more like five paces and rest. On one of those stops I noted two brittle bush in bloom and several more loaded with buds. What's the rush. It's only January. 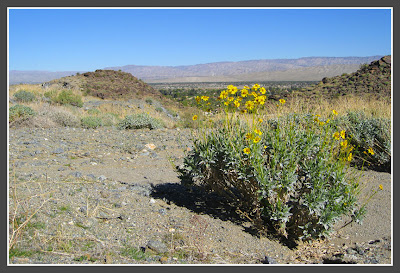 Those bushes might be on an evolutionary fast track. As I continued the hike, I checked the progress of the brittle bush along the trail. The only ones with buds and blossoms were those at that one location on the "lower" elevations of the trail.

The hike today was to the point that overlooks the one time home of Bob Hope. This was a good stop to enjoy and contemplate the views, consider living in the Coachella Valley (thanks to Joni and Rick for bragging about the area) and enjoy the solitude with my own thoughts. 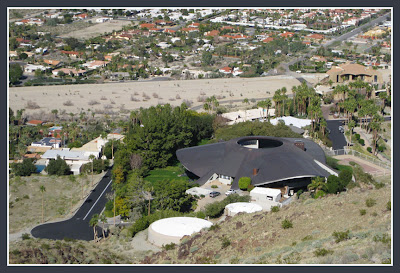 There was more solitude than usual on the trails. It was one of those days where there were fewer hikers or bike riders.

The Goat Track trails do not have the usage of the Bump And Grind trail in nearby Palm Desert. That trail seems to be for those who want to be seen or those who like crowds.

By contrast the Goat Track trails are for those looking for a more tranquil and uncrowded experience. From a high point on returning to the trail head, there wasn't another person to be seen. Great solitude.

And from this point to the trail head it was all down hill -- except for those portions that were uphill. Easier breathing for this older guy. 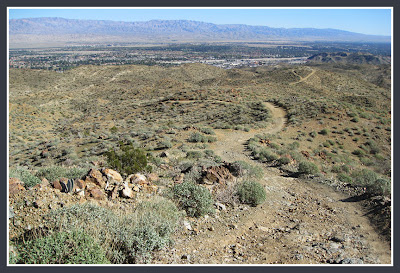 The steepest part of the trail is where I found a bike rider walking his bike up hill to the more level terrain. Chatting for a few minutes before continuing his climb, it was refreshing to know that even some one half my age finds this uphill a serious slog.