The Answer To Life

After walking the Goat Track every other day for several weeks, it was time to check out a new trail. The chosen trail begins at the Ramon dead end in Palm Springs. If the trail has a name, I was unable to figure it out.

Like many trails in the Coachella Valley, it is a steep climb from the trail head. Crumbling rock, brittle bush, creosote and an occasional palo verde were the larger plants. This grass species seems to have a jump on the other grasses. 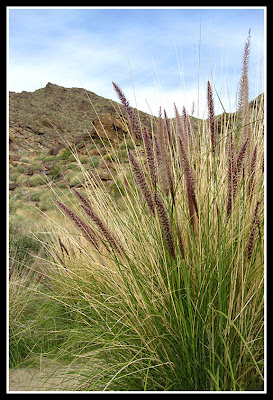 There was little chance of losing the trail, but there were white circle blazes painted along the path. An occasional number was painted on the rocks. Lots of numbers were missing. Without an particular pattern to the numbers, I continued to puzzle for the reason for the numbers. 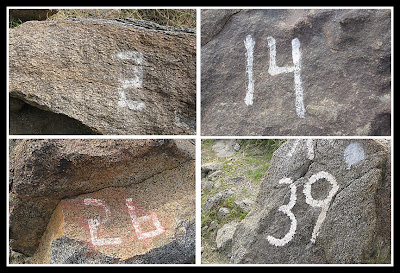 As I slogged and continued to gain elevation I would meet an occasional hiker. In those short conversations, I found that there was a suitable destination for this hike; a picnic area of a half dozen tables.

Arriving at the picnic tables, I wondered if there was table service for this dining location. Turned out it was "bring your own" food.

Beyond the tables was a path to a high point over Palm Springs. 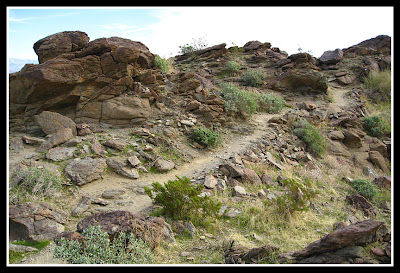 Sitting on a high point rock it was a view of the south end of Palm Springs below. 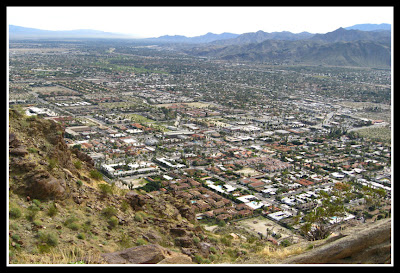 When I turned around to head back to the tables is when I found "The Answer To Life". 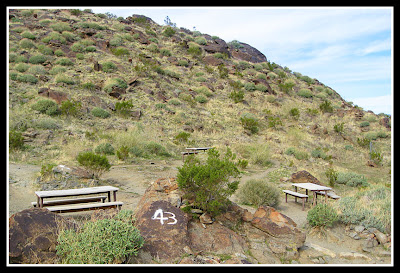 Upon seeing the answer, I knew I had a theme for this hike. Contemplating how I would create this post, I was reminded of Douglas Adams and his The Hitchhiker's Guide to the Galaxy. Science fiction was not a genre I read very often and it had been years since it was read.

Heading back to the trail head, I looked for the numbers painted on the rocks. Having found the answer 43, now I was looking for significance to the other numbers.

Once back at Wandrin Wagon and checking the internet to confirm my recollections, imagine my surprise when I discovered the correct answer was 42. Must be old age setting in. The brain synapses just aren't what they once were.

Oh well. Don't care what Adams concluded, I am sticking with 43 as The Answer To Life.