Wilhemine Pantzlaff was born on May 27, 1863 -- 150 years ago -- in Cedarburg, Wisconsin. She is my great-grandmother on my father's side. At the age of 17, on June 22, 1880 she married my great-grandfather -- Herman Treichel. Eleven years older than his bride, Herman was born in Prussia and in 1852 immigrated as a one year old to the United States.

Probably called Minnie or Mina by family, there may be photos of her. However, I've not been made aware of any. If such a photo had existed, no doubt my cousin Shirley would have had it in the photos from her grandmother Alvina.

Wilhelmine died in 1902 -- three months after Edwin was born. Wilhelmine and Herman had nine children. This is a photo of the nine with their father Herman. My Grandpa Willie stands second from the right. 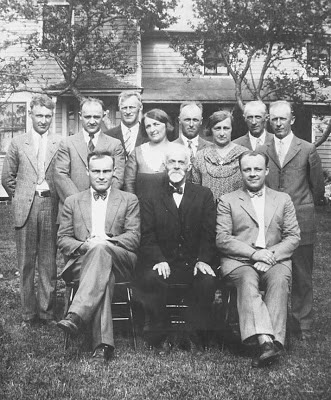 Those nine children were a prolific group. This is a photo of Herman and his grandchildren. The photo was taken a year before Herman's death in 1932. My dad (Earl) stands in the rear row -- fifth male from the left wearing a bow tie. 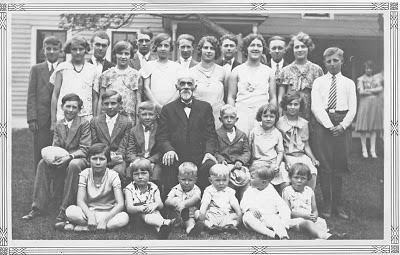 That group makes for lots of cousins. They grew up, married and had children. Many of those in that photo lived as farmers near the Morrison (Wisconsin) community where I grew up. There were many second cousins in the parochial grade school I attended. But that is another story.

Although she died long before my birth, on this Memorial day I remember Wilhelmine once lived.