On The Road To Denver

When parked at the Saguaro SKP park, there were a couple of days of sky filled clouds. 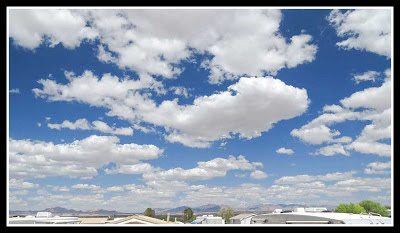 Those clouds brought rain one night. Those few raindrops created a pattern in the dirt on the windshield of Silver Slug. (Lower right hand corner of windshield). 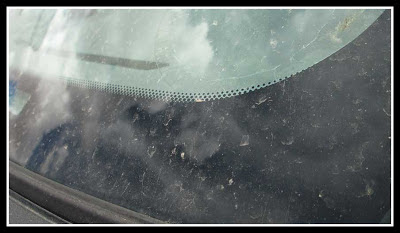 Arizona is warming up. Time for me to move on. New Mexico wasn't much better, but that was the direction of travel to get to Denver.

First stop after leaving the Saguaro SKP park in Benson was Deming, NM. Next day it was a hike at Rock Hound State Park -- just a few miles away. Since rock is ballast, there would be little rock collecting. If an agate, thunder egg or another rock specimen were found I might have collected. However, all I saw was leaverite.

My only souvenir was a photo of this rock. Probably jasper. 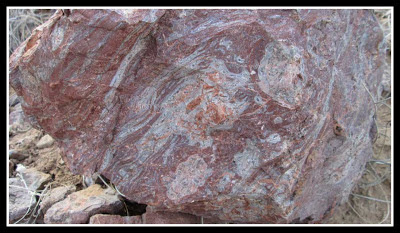 Since Spring Canyon State Park was just a few miles away, that was the second stop that day. Good place for a snack. No camping. Only picnic tables. The place was mine except for the hiker I noticed coming down the road in the park. Selected a picnic table and snacked as the hiker neared. As he passed me, I hoped he had a good hike.

That is where the conversation started. Soon we talked of his retirement hobby of finding stone, carving, polishing and offering for sale. He goes to several rock and mineral shows -- including the big one in Tucson in February. After a long chat, I hoped to see him again in Tucson next winter. 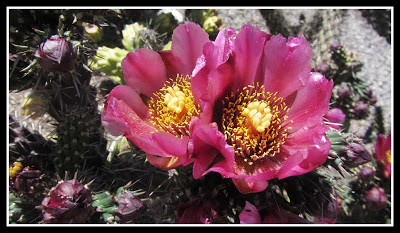 Turned out to be a good day not to travel. It was a windy day and the skies were brown with suspended dirt.

Next travel stop was Elephant Butte Lake SP. It was a one night stop to break up the drive north. Reading Barb of Me and My Dog a day earlier, I noted she was at the park. Since she was boon docking on the ridge above the lake, I noted her rig when I drove in to get a space with electricity for the mid 90 degree temps. Later we got together for chatting. We covered lots of subjects in the hours of conversation. (Note: Her dog Katie really does have one ear that flops forward.)

Next travel stop north was dry camping at the Sandia Casino in north Albuquerque. This was the first big city stop since leaving Tucson on the 2nd of May. Trader Joe's and Costco were stops to restock the pantry, refrigerator and freezer. Lots of big city traffic. It was stressful.

Doing a cross word puzzle yesterday, I looked out the window now and then. That was when I noted something bouncing down next to a curb in the parking lot. 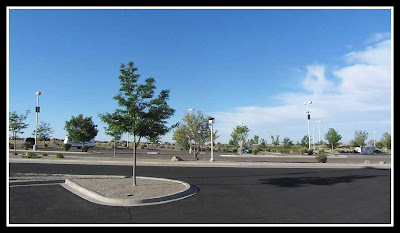 Didn't take long to realize it was a golf ball from the fairway on the other side of the parking lot. Probably a slice from a right handed golfer. Sat there a few minutes waiting for someone to retrieve the ball. Noted a few carts traveling along the fairway. One cart stopped momentarily and then moved on. After about five minutes, I went out to claim another golf ball for my collection: a Nike MOJO.

This morning as I was having my breakfast shake at Sandia, I looked out to see a road runner behind a bush. As I was watching, the road runner leaped at to catch a much smaller bird. Missed it. From the distance, it appeared to be a flycatcher of some sort. Perhaps a kingbird. Sure scared the bird. Grabbed the camera and caught a photo of the road runner before he went in pursuit of breakfast. 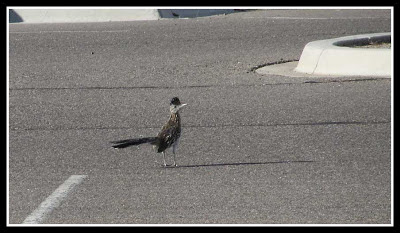 The road to Denver continues. It's good to be back on the road and exploring.
Posted by Unknown at 7:15 PM