Heading into Custer State Park heading to Sylvan Lake, clouds were resting along the road and among the treetops. It did not appear to be a good day for views from atop Harney Peak. (Highest point in South Dakota.) It was still early. Perhaps those clouds would burn off by the time I reached the summit.

This is the scene at the trail head -- a foggy world. No blue sky breaking through the low hanging clouds. 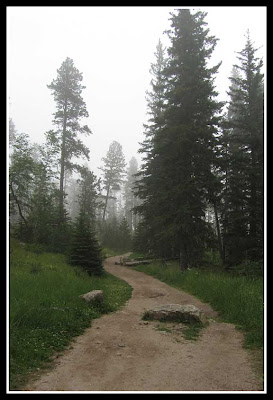 Becoming discouraged by the prospects, I turned around and headed back to the trail head. Soon I met a couple going up the trail. They asked if it was clear at the top. I admitted that I had not gone. Not sure what they said, but I decided what's the big deal. Why not hike. Turning around, I started up the trail once again. Soon I caught up with that same couple reading an information sign. 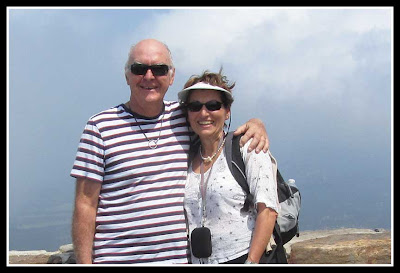 However, we made up for that previous short visit. We chatted throughout the hike to Harney Peak -- up and back. Everybody has a story; Emmie and Ernie provided a few more for my repertoire.

Soon we were at the peak and walked the steps up the 1930s CCC built tower. 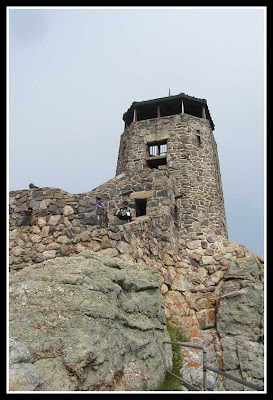 The clouds were burning off -- very slowly. The surrounding peaks were just visible through the cloud cover.

The trail was quite open with dead and dying ponderosa pine most of the way. The beetle kill was quite extensive. From the tower view, the dead trees seemed to cover the hillside. 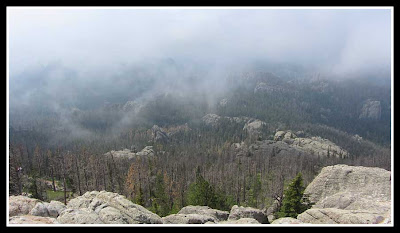 Forgot to mention that Emmie and Ernie are from Australia -- the city of Sydney. Amazing. Crossing paths with them on two different occasions. It is truly a small world.