Doing my usual internet reading early yesterday morning, found that Wagon Teamster may have been just a few miles up the road from my over night at Warren Bridge. I may not have missed him after all. Yesterday morning I headed out early. It was cold and I may as well sit in the warm truck rather than my cold Wandrin Wagon. As I drove north on US 191/189, I noted the occasional road apples on the shoulder. Recognizing scat of different animals is a skill I established early in life as a farm kid.

Watching for any possibility that Wagon Teamster may be in meadows or turnouts along the road, I didn't spot anything. At one point I noted several horse trailers, but there was no Teamster in the group. Continuing on it became apparent that those horse trailers were for the cowboys who were moving cattle along the highway. There was lots of cattle scat (poop) on the road -- mostly squashed. May have been just a few miles where the destination of the herd was found. The cattle and calves were heading into a new green world as the cowboys were sitting atop there horses and doing --- whatever cowboys do after a early morning drive of cattle along a US Highway. Probably trying to figure out the logistics to get back to the horse trailers.

At that point, I was about to give up hope of crossing paths with Teamster Bob in his travels. I was less than ten miles from Bondurant when I saw Teamster Bob's outfit in the front yard of a home. Putting on my hazard lights, I pulled to the wide shoulder of the highway and parked. Grabbed my camera and headed over to meet Bob in person. This was definitely an experience. Been following Bob's travels since 2008 before he actually headed off on his journey to travel the US. 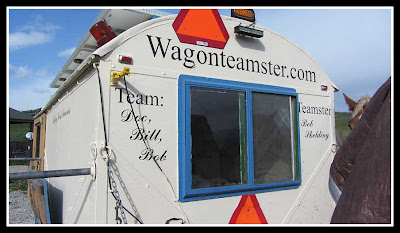 Bob and the team were getting ready to hitch up and continue the journey down the road. They were parked in the yard of Christine and Jim who summer here and return to their home in east Texas. When Christine spotted Bob in Pinedale, she offered Bob and the "lads" a one day lay over for some good grass and rest. Good to give the guys a break once in a while.

As we stood there chatting, it was hitch up time. Not leather harness in the 21st century, but lighter weight plastic/vinyl harness. Still heavy gear throwing 60 pounds up and over your shoulders first thing each morning. 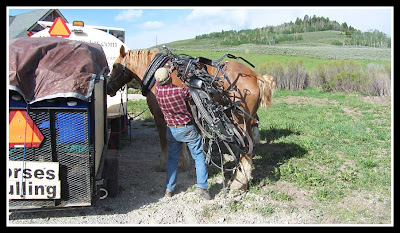 Since I am full of questions, the answers came faster than I could remember them. How many miles on a set of shoes; about 1000. How much water; 100 gallons and lasts about three days. Not only does Bob plan for his personal food, he has to make sure he has hay and oats -- just in case he doesn't have road side grass for the "lads". Bob and Bill are Belgians and Doc is a Percheron -- one that survived the accident in Mississippi.

Soon it was time to move along. I thanked Bob for being here to allow the opportunity to meet with him. Always interested in the stories of people who don't follow the "shoulds" that seem to be part of our culture. 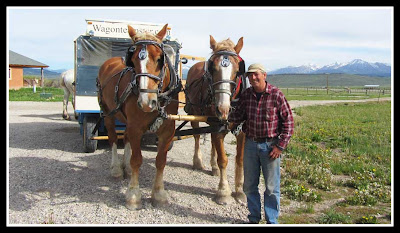 The kindness of strangers continued as Jim returned from the house with elk meats as a farewell gifts to Bob and me. No doubt this would certainly qualify as grass fed meat. As I continued my thanks for the gift, Christine got in the wagon with Bob to travel as far as Bondurant where Jim would pick her up later. 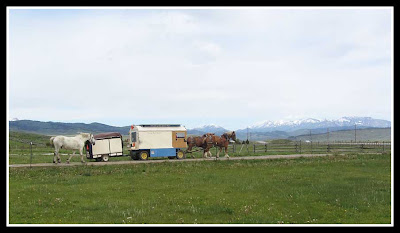 Soon I was on the road following Bob -- with Chistine as his short term passenger. My journey was another 70 miles before ending at the Gros Ventre Campground just north of Jackson. Not sure where Bob stopped, but it was no where near 70 miles.

May have been a cold gray day, but it was a day to remember as I crossed paths with Wagon Teamster Bob and the "lads".