I've been following WagonTeamster Bob as he set off on his journey from New Hampshire in 2008. Followed his travels via his posts including the accident in Mississippi that caused Bob to take a break from his travels.

Bob travels in a wagon towed by draft horses. When Bob hitches up in the morning he puts real meaning into the term "hitching up". Throwing heavy leather harness over the backs of the draft horses and hitching them to the wagon is a way to start your day with some serious exercise. Hitching up a trailer seems a breeze by comparison. 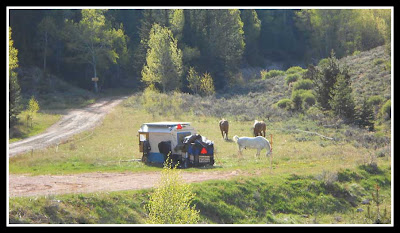 I've often hoped that I could cross paths with Bob and his towing crew to say hello. That chance came as I was making my travel plans from Moab. As I looked at WagonTeamster's intended path, there was a very good chance I could meet Bob on the road. From Fruita Colorado to Jackson Wyoming we planned to follow the same roads.

That was the plan. Sometimes the unplanned happens. Since I am now laid over in Rock Springs for the transmission transplant, I will not be able to catch up with Bob and his horses. They will be far away. Traveling at about 20 miles a day, they may be through Jackson by the time I leave Rock Springs this weekend.

However, there is a positive to this story. There was "visual contact" with Bob and his horses on the road north (Hwy 191) out of Rock Springs. On one of my days of exploring, I was driving along Hwy 191 and noted some "road apples" now and then on the shoulder of the road. Pretty sure those "road apples" were a result of the team passing through the area. The spotting occurred just two days after the WagonTeamster followed the road out of Rock Springs.

For me, I'm impatiently waiting to getting Silver Slug out of the "clinic", hitching up Wandrin Wagon and moving along to follow some of the same roads that WagonTeamster took when leaving Rock Springs.