The cell phone was about four years old and the current two year contract was up. Great time to update to the iPhone.

Really was nothing wrong with that Motorola phone. Great little phone. It has a camera. It rings. It works each time I use it. Ear buds or blue tooth. Which I don't use. It has it all. Pretty modern. But. It is not smart.

Headed off to the Verizon store to check out the smart phones. Wow they were pretty nice. The iPhones were the object of my coveting. Since I was already addicted to Apple gadgets, it seemed only natural to add the iPhone to the line up with my investment in iProduct apps. 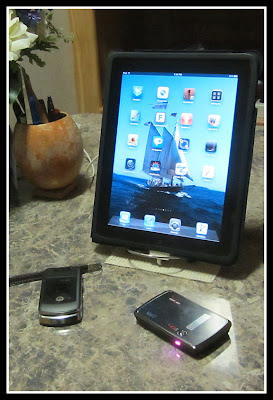 Happened to be relating my smart phone search to daughter Vanita. She wondered why I would want a smart phone when I had a Mi-Fi card and an iPad (or iPod Touch) with me most times. Knew I had a bright kid there. Probably takes after her mother. Appears she didn't get that gene from me.

Back to the Verizon store. Still coveted that iPhone. Wow. It would be $199 and a two year contract. What other charges would there be was the question of the lovely Verizon rep. On top of the talk minutes, any smart phone has an automatic $30 per month charge. Really. Didn't know that. No matter how much it is used -- if at all. Hmmm.

Daughter Vanita was onto something there. Already have a phone that works. Have an iPad and a Mi-Fi card with me all the time. Save $199 today and $30 a month. Wow. That adds up to a lot of money.

And that is the review of the iPhone. I may have wanted it. But I didn't need it. Perhaps I am smarter than a smart phone.