On my way to San Diego from Palm Springs, I stopped in to visit several road acquaintances who now have lots at the Jojoba Hills Escapee RV Park. That includes Brian -- my personal chef. Well. He is my personal chef when we happen to traveling in the same neighborhoods. 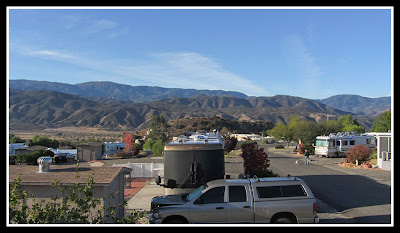 During my week long visit, Brian and other Jojoba Hills acquaintances were merciless in their touting the positives of their park. It would be easy to put my name on the list and -- probably -- in a year I would have a lot at Jojoba Hills. As I exited the park, I stopped at the office to get the paper work for placing my name on their list.

Jojoba Hills is located about a 20 minute drive east of Temecula. Extensive shopping alternatives and medical facilities abound in Temecula and nearby Murrieta. Local exploring includes wineries, hiking, and tourist attractions in Temecula or Julian. Palm Springs and the Coachella Valley is just over the mountains to the north. A San Diego visit to Vanita's house would be about 80 miles away. All positives for a lot at Jojoba Hills.

Now that I have been on the road for ten years, it seems attractive -- in the academic sense -- to stop for seven to eight winter months. However, the prospect actually scares me. In these past years, the longest I have stayed in any one RV park was for two months. A longer test is coming up when I head to Tucson in mid December. The reservation is for three months at which point the Wandrin travels will begin for 2012.

There are many places to consider for that extended winter stay. Jojoba Hills is just one of the several possibilities. Now there is something else to keep me awake at night.