It's a milestone of sorts. Ten years ago this week, I started my nomadic exploring with Wandrin Wagon in tow behind Silver Slug. The morning I headed east on US Hwy 34 out of Greeley Colorado was overcast and rainy. Fortunately those weather conditions weren't an omen of the next ten years.

There have been a few "potholes" along the way which caused some change in plans, but there was nothing to cause me to consider stopping being a nomad. After two years, the travel had become habit and I found it very enjoyable. Two years became three. Became four. Next thing, ten years had passed. 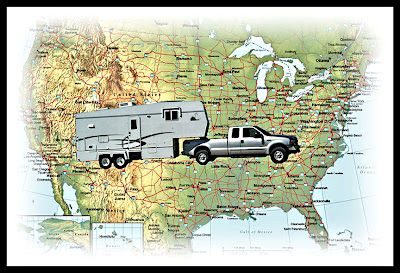 The chorus of I've Been Everywhere seemed fitting.

Really, I haven't been everywhere. I haven't been to all the places mentioned in the lyrics of the song. It would take 20 lifetimes to explore and wander around the US and see it all. Since I don't have 20 life times, I will explore what I can in this life time.

During those ten years of travel, I have managed to explore the perimeter of the 48 states including the "corners" like Key West or the Pacific Coast on Washington's Olympic Peninsula. Beyond the perimeter, most of my exploring has been in the western US. The rocky terrain and expansive views are where I like to explore and wander -- and frequently wonder.

The plans for future nomadic travel are for extended stays and less travel. At least that is the plan. But will I be happy. Or will "hitch itch" get too strong to ignore.