Shop Class As Soulcraft by Matthew B. Crawford

I could not improve on the book summary found on the cover of the book:

"On both economic and psychological grounds, Crawford questions the educational imperative of turning everyone into a “knowledge worker,” based on a misguided separation of thinking from doing, the work of the hand from that of the mind. Crawford shows us how such a partition, which began a century ago with the assembly line, degrades work for those on both sides of the divide."

The author asks questions with the implication who is going to repair the cars, the plumbing problem, the electrical problem, remodeling your home, etc. The design of cars these days is that the on board computers will determine where the problem is. Sometimes it may be right, but other times a wrong diagnosis requires a human brain to resolve the issue. Where will that skill come from.

Everyone knows a college graduate or post graduates who are looking for jobs to try to pay down the huge loans they took to get through college. And for what. Many have no skills that are readily useful to the hiring company. The college graduate will have to be trained.

Personal education history... I was lucky. Dad thought there was a better future for me than farming. Few boys from the country finished high school. Bouts with asthma and hay fever made me a poor candidate to consider farming as a career. 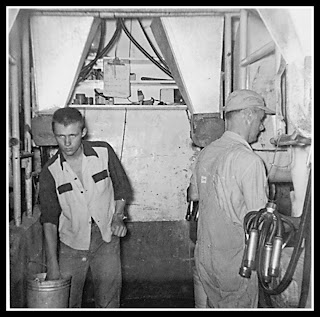 After the country grade school, it was eleven miles from the farm on the bus to DePere High School. As a farm kid, my roster of classes included an agriculture vocational class. No one really asked what I wanted. I was pretty sure I didn't want to be the part of the fourth generation of Treichel farmers in Morrison township. But there I was in Ag class and learned some tool skills and the latest in agriculture knowledge from the University of Wisconsin Ag School. However, since I had no intention of farming, that was the last year of vocational training in a classroom. After that it was all academia for me through the University of Wisconsin.

Yup. I proved that I could complete the required course work and get the degree. That made me trainable to the Bank of America when they hired me. Soon I was a computer programmer. I was good at it and have continued to enjoy programming. My latest coding was within Excel where I created code to solve Sudoku puzzles. Otherwise the Sudoku puzzles bore me. (Crossword puzzles are my choice. It's one way to stay current with the latest on TV.)

Data Processing or Information Technology was my ride to retirement with the last 15 years working for the computer manufacturer. It was a great ride. After all that academic training, when programming, I was essentially doing vocational work -- cranking out code. I was lucky. Right place. Right Time. Today many programming jobs are sent over seas where hourly rates are less.

Education today.... Considering drop out rates, does anyone ever ask why? Does anyone ever ask if academia is the right course for everyone. Perhaps we could keep some of those kids in school if there was something they could relate to. Today's education systems rarely have any kind of vocational program in the high school.

There is a serious problem in our education system. Each person is different with motivations and interests. Basic book education is important -- the three Rs. However, at some point there may be a better direction for some students. How about recognizing that everyone is not academically interested and allow students a vocational track after ninth grade.

That doesn't mean the student must stay on that track. After testing some phases of the vocational world, perhaps the academic world may be more attractive to the student. Same thing applies to the academic inclined. Perhaps the basics of car repair would be of interest.

Finally, how about a high school level course in "basic" economics and financial matters for all students -- from a check book, to a credit card, to planning for the future with savings.

The current education system doesn't seem to be working. Perhaps some new methods and approaches are required after doing education the same way for over a 100 years. This is not a good place for tradition.


Note: The photo was taken in the four stall "milking parlor" that Dad built in the early 50s. That was some of my vocational training. On the job milking cows.  Photo taken when I was 18/19.
Posted by Unknown at 5:15 PM