Found myself in the Ford dealer's waiting room as Silver Slug was having an oil change. Passing time while reading on my iPad, another customer decided that the TV would be the perfect way to catch up on the news. After scanning the channels, he settled on some "news channel" (or is that opinion). With the shouting and the slurring political ads, it became hard to concentrate on what I was reading. I put the iPad away and headed out to wander around the car/truck lot.

Later back at Wandrin Wagon I was still stressing over what passed for TV news. Later in the day, I ended up at my Mac computer. The first random photo that appeared on the Mac's screen happened to be this rose. I needed that -- to balance the ugly. 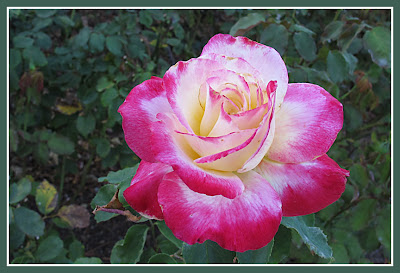