Yup. Woke this morning to mostly sunny blue skies. There was a very thin marine layer which soon evaporated with the sun. Tomorrow it is to be more of the same. (We'll see). Needless to say the locals are really happy with the change in weather. After all it was the first day of summer yesterday.

Yesterday when the skies were gray, I headed north to Langley, BC in Canada to visit with San Diego snowbird acquaintances Sheila and Phil. We chatted, had lunch and chatted more as I was given a tour of the valley(s) west of Vancouver.

In the hours we chatted we talked of lots of things. At one point Phil and I were talking of car shows and how we preferred cars that look like the day they were purchased new. I mentioned that in a recent visit to a car show, there were more than the usual number of cars that were stock. The cars had not been converted to some idealistic and artistic version of the original shape.

The stand out for me was this 1951 Ford. Original paint color (Alpine Blue). Original engine -- not overhauled. Original windows with the Ford logo on the windows (that was the last year Ford made their own glass). 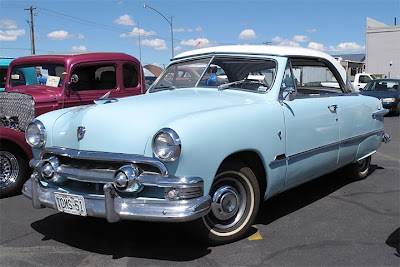 The current owner (in his mid 70s) purchased this car in 1980 and restored it to its condition. Why the love for the car. After getting out of the US Navy about 1960, he was a little reckless (his careful wording) and managed to have several accidents in cars of the 1950s vintage. Having survived the accidents, this restoration seems to have been a modest tribute to those cars of his early life.