“We’ve forgotten the benefit of surface travel: It forces you to understand, deep in your bones, the distance you’ve covered; and it gradually eases you into a new context that exists not only outside your body, but inside your head.” -- Seth Stevenson, Grounded (2010)

As I travel, I've spotted bicycles with loaded panniers -- sometimes with a small trailer. Most frequently it is two riders -- a couple. And most times it is a man and a woman. The woman is always several 100 yards and sometimes a mile behind the male half of the bike riding duo.

Today it is was solo rider -- Alex from Quebec. 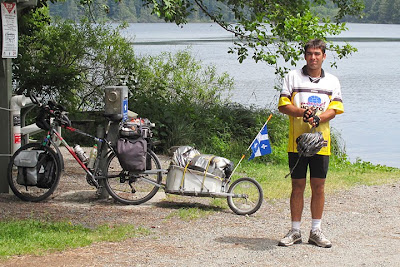 As I was pulling through a stop sign on Fidalgo Island near Anacortes, I spotted Alex with the Quebec flag on his bicycle. Commented to him that he was a long way from home. Soon we were chatting at a nearby picnic area where Alex refueled his body for more miles before his day was over. This bike ride was the result of his employer's downsizing his job. His planned journey will continue through part of California before heading east and passing through Denver on his way back home to Quebec.

Each time I have an opportunity to chat with one of these traveling cross country bike riders, I am humbled and embarrassed to consider myself a traveler. By comparison, I am a tourist.

And to you Alex.... Wishing you safe travels.
Posted by Unknown at 9:26 PM