The roads were mostly straight sections today from Winnemucca, Nevada to Burns, Oregon. The highways followed the valleys between hills and mountains. Cattle ranches were scattered along the way and a few irrigated hay fields had been claimed from the usual sage brush. 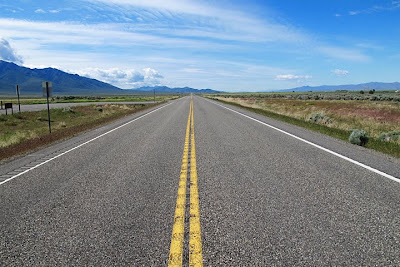 The drive was pleasant compared to the very short distance on I-80 yesterday. Hate freeways.

In addition to the cattle pasturing in the sage brush, there were deer, antelope, occasional hawks and crows perched atop a power pole. Or in the absence of power poles -- they were perched on fence posts. The wild life was balanced with at least one flattened snake. Soaking up warmth on the highway was a bad decision.

On one straight section of about 70 miles I was passed by three cars and met six. This is my kind of travel. 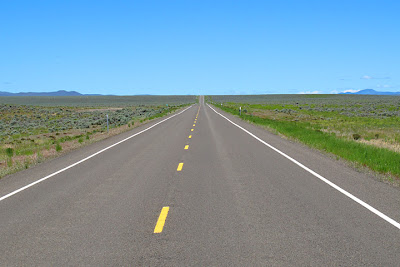 Soon the satellite radio was turned off and my mind was planning near term 2010 travel; tentative travel plans for years 2011 and 2012; where to settle when done wandering.... No firm decisions were made, but the field of possibilities was narrowed.